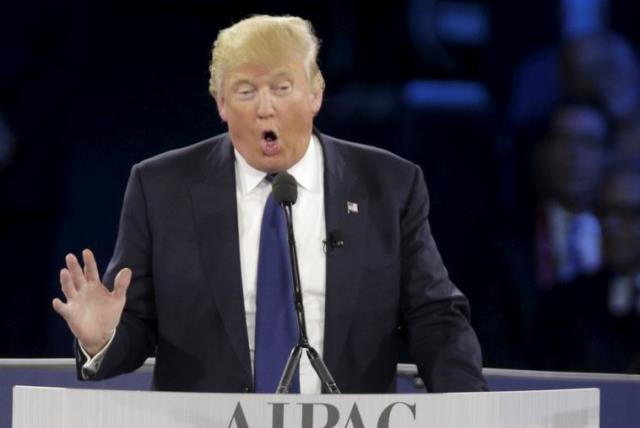 "Donald Trump is disqualifying himself from serving as President of the United States," Wasserman Schultz says.

WASHINGTON – The Jewish chairwoman of the Democratic National Committee, Rep. Debbie Wasserman Schultz of Florida, slammed presumptive Republican presidential nominee Donald Trump on Thursday for defending a tweet interpreted by many in the American Jewish community to have anti-Semitic overtones.The tweet, which features a graphic six-pointed star over a pile of money accusing Clinton of corruption, “is only the latest indication that the divisive nature of his campaign is no accident,” said Wasserman Schultz.
Advertisement
“Whether it was failing to disavow David Duke, dismissing concerns of Jewish reporters who have been harassed by his supporters, or tweeting out coded anti-Semitic appeals, Donald Trump is disqualifying himself from serving as president of the United States,” she continued, adding that “language and discriminatory tactics that pit Americans against one another have no place in any campaign, and are unconscionable from someone asking the American people to elect them to the presidency.”Trump has been defending the tweet, on Wednesday night slamming the media for conjuring up fake controversy and on Thursday morning tweeting out photos of Disney Frozen coloring books featuring the same graphic six-pointed star. “Where is the outrage for this Disney book? Is this the ‘Star of David’ also? Dishonest media! #Frozen,” he tweeted.

Where is the outrage for this Disney book? Is this the 'Star of David' also?
Dishonest media! #Frozen pic.twitter.com/4LJBpSm8xa
— Donald J. Trump (@realDonaldTrump) July 7, 2016

His Jewish son-in-law Jared Kushner also published an opinion piece on Wednesday, declaring: “My father-in-law is not an anti-Semite. It’s that simple.”Republican presidential candidate Donald Trump on Wednesday rejected criticism of his campaign tactics, in a wide-ranging speech defending his team’s use of a Jewish star and his own praise of the late Iraqi leader Saddam Hussein.At a campaign rally in Cincinnati on Wednesday, Trump vented his frustration at news media he feels are out to derail his candidacy and help Democratic rival Hillary Clinton, deriding CNN, in particular, as the “Clinton News Network.”Trump said he thought the star was more the shape of a sheriff’s badge. He described as “sick people” those in the news media who called it a Jewish Star of David.Reuters contributed to this report.
Advertisement
Advertisement
Breaking News World News Iran News Coronavirus U.S. POLITICS Kabbalah
Advertise with us Terms of Service Privacy Policy cancel subscription
Copyright 2021 Jpost Inc.
Designed by DANIEL CHEN