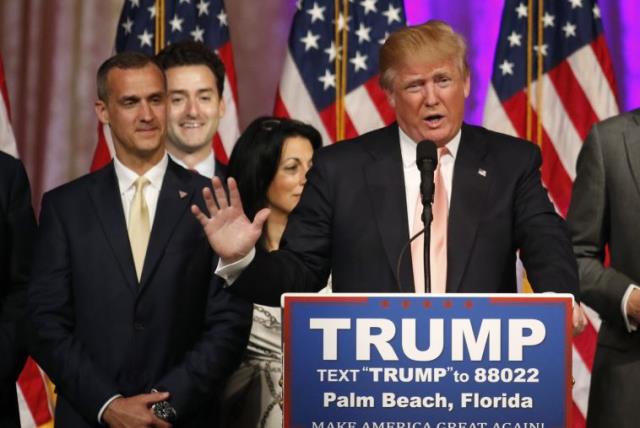 Republican US presidential candidate Donald Trump speaks with his campaign manager Corey Lewandowski (L) at his side as he talks about the results of the Florida, Ohio, North Carolina, Illinois and Missouri primary elections
(photo credit: REUTERS)
WASHINGTON — Tensions between Donald Trump’s campaign manager Corey Lewandowski and Jewish son-in-law Jared Kushner reportedly were behind Lewandowski’s departure announced Monday by the campaign.On the same day, Lewandowski said separately that he stood by Trump, the presumptive Republican presidential nominee.
Advertisement
The New York Times first reported what it said was a firing, and CNN followed up by reporting that Ivanka Trump, a convert to Judaism, persuaded her father to let Lewandowski go, citing tensions between the campaign manager and her husband, Kushner.According to one source cited in the CNN story, the last straw for Ivanka Trump was hearing that Lewandowski planned to plant negative stories about her husband in the media.Kushner, the scion of a real estate family and publisher of the New York Observer, is handling the hiring of a transition team should Trump, also a real estate magnate, win the presidency. Kushner, who is an Orthodox Jew, has been instrumental in shaping Trump’s positions on Israel.Trump has been floundering since his unexpected run to the nomination, in which he crushed 16 opponents in the primaries. He has yet to rally against the presumptive Democratic Party nominee, Hillary Clinton, with his poll numbers dropping and Republicans bewildered at how he lost ground to Clinton after the mass shooting last week in Orlando by a man who declared loyalty to the Islamic State terrorist group.
Advertisement
Republicans routinely do better on national security issues, but Trump’s initial I-told-you-so reaction apparently alienated voters.Lewandowski was seen as the architect of the pugnacious, self-congratulatory style that helped Trump win the primaries, but other advisers are now pressing Trump to adopt a more statesmanlike demeanor as he faces Clinton in the general election. The differences have led to multiple reports about tensions in the campaign.“I want to say how honored I am to be part of this team, and it’s been such a privilege to be part of this team,” Lewandowski said on MSNBC. “I have supported and will support Donald trump in any endeavor he has.”