Ahead of New Hampshire vote, focus on the role of commander-in-chief 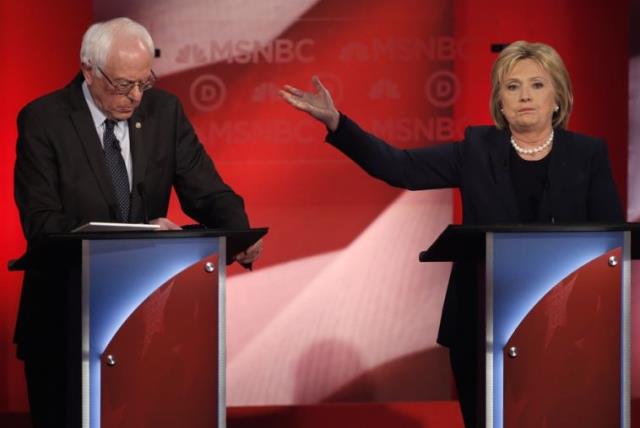 “Over there, if you try to be kind, its a show of weakness. You can’t be weak.”

HUDSON – After a year of campaigning, the first votes for president of the United States are to be finally be cast on Tuesday in the state of New Hampshire, where a field of nine Republican and two Democratic candidates is braced for a whittling.Entering the first-in-the-nation primary, statewide support for the front-runners in both parties remained strong: Republican Donald J. Trump, a real estate mogul, and Democratic socialist Bernie Sanders, a Jewish senator from neighboring Vermont, were both poised for comfortable victories in the state.
Advertisement
Eyes are thus focused on how the rest of the field performs: Whether former secretary of state, senator and first lady Hillary Rodham Clinton can defy expectations – as she did in her first run in 2008 against then-senator Barack Obama, when she pulled out a surprise victory here – and whether GOP candidates fighting for their political lives can pull off strong also-ran finishes to the bombastic New York businessman.Among the Republicans, three candidates running on their experience in governor’s mansions – Jeb Bush of Florida, Chris Christie of New Jersey and John Kasich of Ohio – have all pitched themselves as steady hands in a dangerous world. At a rally here in Hudson, a small town in the state’s south, Christie said he was the only contender ever to have fought terrorism as both a prosecutor and a governor.“Over there, if you try to be kind, its a show of weakness. You can’t be weak,” said one attendee, Daniel Pletcher, at Christie’s rally in a metal fabrication plant.
Pletcher, who was referring to the Middle East, remains undecided between Christie and Kasich just hours before polls open.On television screens across the state on Sunday night, as residents sought refuge from politics in the Super Bowl 50, a familiar face appeared before them: former president George W. Bush.
Advertisement
“Experience and judgment count in the Oval Office,” Bush said.He was endorsing his brother, who, like his governor colleagues, is struggling in this race to catch fire as Trump continues to dominate the polls.And at a rally for Kasich on Sunday, in the hallway of a community college in Nashua, one volunteer for the governor who flew in from Ohio mentioned his support for Israel and a liberalized Middle East: “John Kasich is a man of deep religious conviction,” he said, of the governor who found faith in Anglicanism after the death of his parents in a car crash.After a second-place finish in the Iowa caucuses to Texas Senator Ted Cruz, Trump explicitly stated he will be dissatisfied with anything less than a decisive win in the Granite State.He is well positioned for that victory: A Real- ClearPolitics polling average shows him with a double-digit lead over his nearest rival, Florida Senator Marco Rubio, who has taken a beating himself in recent days after a strong thirdplace showing in Iowa’s contest.“Our country needs competency,” Trump said in a video advertisement released through Facebook on Monday. “We need a great leader.We don’t need what we have now. And many of the people I’m running against are going to be just what we have now. If I’m elected president, I will do a truly great job,” he continued. “I’ll make America great again.Everybody’s going to be very, very happy.”A failure to perform well here in New Hampshire would shut down avenues for many fading candidates to further finance their ambitions.Nevertheless, some candidates, such as Bush, have pledged to move on to the next two contests in South Carolina and Nevada.On the Democratic side, Sanders is slated for a substantial victory, averaging a 13-point lead over Clinton. At a rally in Nashua on Monday, Sanders once again pledged a bottom-up “political revolution” across the country, where young voters have rallied to his cause.Speaking to The Jerusalem Post, several young Sanders voters said the factors driving their vote were not related national security, but were entirely economical.“I’ve been saddled with more college debt than you can imagine,” said one pledged voter, named Michael, from Hampton. “I don’t want that for my kids.”Sanders did not mention foreign policy at his rally. On Sunday, he faced criticism for acknowledging a lack of any permanent foreign policy advisers on his team.Snow began to fall across the state on Monday and was forecast to continue through voting on Tuesday, burying parts of the region in up to 18 centimeters. State and local officials don’t believe it will significantly deter turnout, however, projecting record crowds at the polls over the weekend.
Advertisement
Advertisement
Breaking News World News Iran News Coronavirus U.S. POLITICS Kabbalah
Advertise with us Terms of Service Privacy Policy cancel subscription
Copyright 2021 Jpost Inc.
Designed by DANIEL CHEN