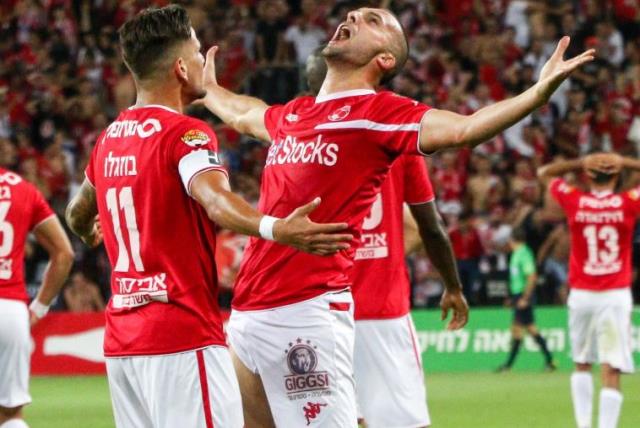 Finally, we turn to the people of Beersheba, the fans of the team, who also come from all backgrounds, equal in the fervor they demonstrate in support of their team.

Something spectacular happened in Israel last weekend, when the greatness and beauty of our state was manifest in the unlikeliest of settings: on a soccer field in Beersheba.It was there that Hapoel Beersheba defeated Bnei Sakhnin 3-1 on Saturday night, clinching the championship of Israel’s soccer Premier League. For Beersheba, that was no small matter – it was its first championship since 1976.
Advertisement
So how did this victory demonstrate the best that Israel has to offer? Let’s start with the team owner, Alona Barkat. We all know professional sports ownership and management is male-dominated.That a female took over an unsuccessful, second-division team and built it into a champion demonstrates that there is no glass ceiling for women in Israel, neither in the business world nor in the sports world. Not to say that there weren’t challenges for Barkat, and that we still have a way to go to achieve complete gender equality. But seeing a female owner being celebrated by all the male coaches, managers and players demonstrates a beautiful side of Israel.Next we look to the players. The Hapoel Beersheba roster includes Jews, Muslims and Christians, players from different races. All came together with respect and friendship to win this championship.All stood side by side as the national anthem was sung before games. What better example demonstrates what we are as a Jewish state, where minorities and members of different faiths are given equal opportunity and equal rights? This unity is not limited to the players.
Advertisement
Barkat explained in all of her post-championship interviews that her reason for purchasing the team was not simply because of her love for sports but because she felt it had potential to serve as a base for social change. Sure enough the team works together with the community and offers a variety of programs for hundreds of youth, including from the Beduin and Ethiopian populations.Finally, we turn to the people of Beersheba, the fans of the team, who also come from all backgrounds, equal in the fervor they demonstrate in support of their team. But more remarkable is the respect they show for the opposing teams and their fans – especially toward Arab players and the top league’s Arab team.It wasn’t always this way. Not long ago, the fans of Hapoel Beersheba fit the classic mold of “soccer hooligans,” boors lacking any semblance of sportsmanship.But at the urging and direction of the team’s management, they went through a transition. A fundamental transition.And this too demonstrates the best of Israel, where sports serve not only as entertainment and recreation, but as a vehicle to break down barriers and bring people together.How much Beersheba’s championship meant to Israelis was evident on Sunday morning, when the media headlines – notwithstanding the overload of coalition news – were dominated by the championship, proving once again that despite all the political strife and chaos, despite all the security and socioeconomic challenges that Israel faces, we are also a normal country, where people love soccer and thrill to the Cinderella story of Beersheba’s championship.Indeed, perhaps because of the internal and external turmoil, we need to take a step back to focus on the special things that are happening in our young and growing state – a mere 68 years old, still in its early developmental stage in historical terms. Hapoel Beersheba’s championship – with all of its wonderful back stories – provided us with that distraction.Congratulations to the team and to the people of Beersheba. Thank you for reminding us that we live in a truly remarkable country.

The author served in the 19th Knesset with the Yesh Atid party. He is currently the director of the Department of Zionist Operations for the World Zionist Organization. The opinions expressed here do not necessarily reflect those of the WZO.
Advertisement
Advertisement
Breaking News World News Iran News Coronavirus U.S. POLITICS Kabbalah
Advertise with us Terms of Service Privacy Policy cancel subscription
Copyright 2021 Jpost Inc.
Designed by DANIEL CHEN