Hitler’s Mein Kampf (My Struggle) may soon become our struggle 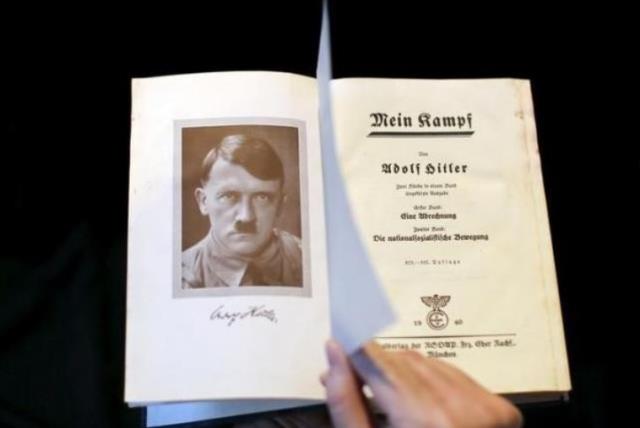 A copy of Adolf Hitler's book ''Mein Kampf'' (My Struggle) from 1940 is pictured in Berlin, Germany
(photo credit: REUTERS)

Through the quality of our connections we will cause the rise of Hitlerism or its final disappearance.

The mass distribution of Adolf Hitler’s infamous, anti-Semitic rant known as Mein Kampf (My Struggle) has recently been given a big boost by the initiative of Italian conservative leaning newspaper, Il Giornale, to give the book as a gift to anyone who buys a copy of the paper. Considering the global rise of anti-Semitism, this move could prove to be a precursor of another epic catastrophe for the Jewish people.“If … the Jew is victorious over the other peoples of the world, his crown will be the funeral wreath of humanity.” This past weekend, thousands of readers of the Italian newspaper, Il Giornale, consumed these venomous words, as well as numerous other anti-Semitic tropes, as the paper distributed thousands of free copies of Mein Kampf, Adolf Hitler’s autobiography.
Advertisement
The newspaper was scolded for its decision. Italian Prime Minister, Matteo Renzi, described the act as “squalid,” while others criticized the newspaper’s move as a “sales trick.” In its defense, the paper argued that the initiative would “educate readers about the evils of Nazism.”Since the end of World War II and until January 1, 2016, the distribution of the book had been banned in Europe. But now that the copyrights have expired, the book is being distributed once more. Although an annotated version of the text is being distributed and sold in Germany and Italy “for educational purposes,” copies of the original text can easily be purchased online and in bookstores throughout the world. In consequence, just over seventy years after the end of the most satanic attempt to exterminate the Jews, the text that fueled the Nazi ideology is once again a bestseller—all around the world.

Anti-Semitic FuelDespite the decades that have passed since the end of World War II, very little has changed with regard to attitudes toward Jews. There may have been a hiatus in overt expressions of Jew hatred, but its poison has neither faded nor lost its malice. In recent years we have witnessed a reemergence of blatant anti-Semitism the world over. While terrorists are killing innocent civilians on the streets and in cafés in Tel-Aviv, the international media warps the truth and portrays such actions as “shooting incidents.” Anti-Israel movements, such as BDS (Boycotts, Divestment and Sanctions) are trying to maim Israel economically and academically, and following every major terror attack around the world, some petty politician declares a false-flag and puts the blame on Israel.Back in the early 1950s, renowned Kabbalist, Rav Yehuda Ashlag, wrote in his insightful composition, The Writings of the Last Generation: “The world erroneously considers Nazism a particular offshoot of Germany. In truth … all the nations are equal in that; there is no hope at all that Nazism will perish with the victory of the allies, for tomorrow the Anglo-Saxons will adopt Nazism.”
Advertisement
As Mein Kampf fueled anti-Semitism then and gave it “rational” justification, so it can do now. Today the book is so widespread that to undo its vile impact we must tackle the reason for its spreading in the first place: anti-Semitism.The Power of Connection

In that same book, the Rav Ashlag notes that “it is a fact that Israel is hated by all the nations, whether for religious, racial, capitalist, communist, or for cosmopolitan reasons, etc. It is so because the hatred precedes all reasons, and each [faction] merely resolves its loathing according to its own psychology.” Ashlag continues to explain that the Jewish people have a role to play in the world, and as long as we refrain from carrying it out we will be hated under various pretexts.To know our role in the world, we need to understand our place in the global network that is humanity. Within that network, the Jews are the joints and junctions that allow us to feel connected, learn from one another, empower, and be empowered by each other. Without the Jews, the human network would be dark and lifeless. Our ancestors, the ancient Hebrews, developed a method of connection whereby each person could use his or her natural egoism for the common good, thereby supporting the society and strengthening it.The early Jews did not suppress their egos the way Eastern teachings and New Age groups often suggest. Instead, they rose above their egos, as King Solomon states (Proverbs, 10:12), “covering their crimes with love.” In doing so, they unleashed a force that elevated them above their egos and fused them into a unified nation.This unique method was not intended for the Jews alone. It was intended as a means of connection for the entire world. Israel was meant to be “a light unto nations,” providing the world with an example of a method for achieving unity because, as the Rav Kook put it, “In Israel lies the secret to the unity of the world.”

His Struggle, Our Struggle

“The Jew is only united when a common danger forces him to be or a common booty entices him,” writes Hitler, and not without a grain of truth. “If these two grounds are lacking, the qualities of the crassest egoism come into their own,” he concludes.The Rav Ashlag, Rav Kook, and many other Jewish leaders point to the connection between the state of the world and the role of the Israeli people. In his book, Orot (Lights), the Rav Kook wrote, “The construction of the world, which is currently crumpled by the dreadful storms of a blood-filled sword, requires the construction of the Israeli nation. The construction of the nation and the revealing of its spirit are one and the same, and it is one with the construction of the world, which is crumpling in anticipation for a force full of unity and sublimity.”But in the absence of that “force full of unity” in our connections, the power of hatred prevails in the world and drives people apart. This malignant force is what caused Adolf Hitler, Henry Ford and numerous anti-Semites throughout the ages to feel that the Jews are the source of all that is evil in the world. They felt that the Jews were not doing what they were intended to do. In consequence, as the Rav Ashlag wrote, “In such a generation, all the destructors among the Nations of the World raise their heads and wish primarily to destroy and to kill the Children of Israel, as it is written (Yevamot 63), ‘No calamity comes to the world but for Israel.’” It is so because, to use the words of The Zohar (Tikkun no. 30), Israel are causing “poverty, ruin, robbery, killing, and destructions throughout the world.”But when we Jews take to the path of brotherhood and unite “as one man with one heart,” we invoke that power of connection and project it throughout the human network to the entire world. That power softens people’s hearts and brings them closer to each other. At the same time, it uproots anti-Semitic thoughts, as people begin to sense the benefit that Jews are bringing to the world. In the words of the Maor Vashemesh, “The prime defense against calamity is love and unity. When there are love, unity, and friendship between each other in Israel, no calamity can come over them.”This is our struggle. Through the quality of our connections we will cause the rise of Hitlerism or its final disappearance.Michael Laitman is a Professor of Ontology, a PhD in Philosophy and Kabbalah, and an MSc in Medical Bio-Cybernetics. He was the prime disciple of Kabbalist, Rav Baruch Ashlag (the RABASH). Prof. Laitman has written over 40 books, translated into dozens of languages; he is the founder and president of the ARI Institute, and a sought after speaker.