Democrats remain in the pro-Israel camp, despite Pew Poll 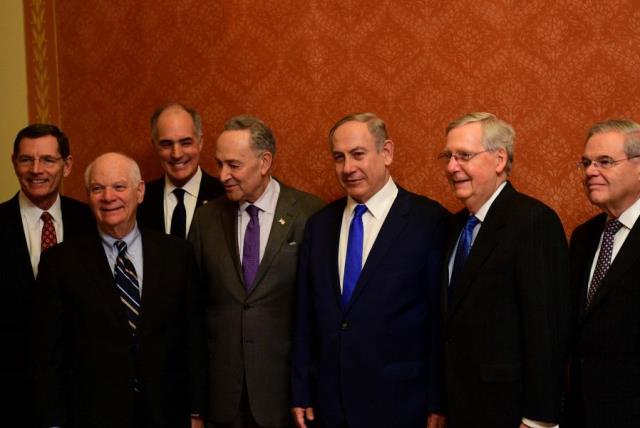 Netanyahu and US Congress members, including Senator Chuck Schumer next to the prime minister on the left
(photo credit: AVI OHAYON - GPO)

It’s worth remembering that anti-Israel sentiment in the United States comes from both the far Right and the far Left.

Israel has a steadfast friend in the Democratic Party, even as the Jewish state faces foes on the extremes of the political spectrum. Last week’s Pew poll on differences in partisan attitudes toward Israel set off some conversation and speculation in the pro-Israel community. While the survey claimed support for Israel among Democrats was decreasing, the results do not tell the full story of a party that remains squarely behind the Jewish state.As former US ambassador to Israel Daniel Shapiro and Tamara Wittes of the Brookings Institution pointed out in an article for The Atlantic, the poll suffered from multiple flaws when it came to gauging the attitudes of Americans toward Israel. For one, it based its results on only one question: whether participants “sympathized” more with Israel or the Palestinians. As Shapiro and Wittes wrote, there is so much that such a question leaves out. Some Americans may “sympathize” with the Palestinians while strongly supporting Israel’s right to defend itself and celebrating our two countries’ shared values.
Advertisement
Nonetheless, the poll does point to a problem, as it shows a decline in sympathy for Israel. The reasons for this are complicated. One reason has to do with the partisan associations that have developed around certain Israeli politicians. Prime Minister Benjamin Netanyahu, for example, is seen as having a close relationship with US President Donald Trump, while he was thought to have a turbulent relationship with former president Barack Obama. As a result, many Democrats see Netanyahu as the face of Israel in a partisan way, coloring their attitude toward the country. In addition, the current Israeli government has pursued certain policies that have alienated some Democrats.We understand that many Americans see Israel as a country facing a variety of challenges, and some are concerned for the plight of the Palestinians. But an in-depth understanding goes much further than that. Just as Americans can question and criticize our president, with nobody saying that as a result we don’t love our country, so too can Americans criticize Israeli leaders while still backing Israel’s right to self-defense and right to exist as a Jewish state, as well as embracing the mutually beneficial US-Israel alliance.Viewing Israel beyond the conflict, Democrats can easily see the values the two countries hold in common: democratic governance, freedom of speech, equality for women and members of the LGBT community, and an independent judicial system that favors human rights. Israel is also one of our closest strategic allies. Our two nations cooperate on a range of shared intelligence and military exercises in the fights against terrorism, and work together on revolutionary anti-missile technology. In short, a stronger Israel means a stronger United States, and vice versa.The Democratic Party platform is very clear on this: “A strong and secure Israel is vital to the United States because we share overarching strategic interests and the common values of democracy, equality, tolerance, and pluralism. That is why we will always support Israel’s right to defend itself, including by retaining its qualitative military edge, and oppose any effort to delegitimize Israel, including at the United Nations or through the Boycott, Divestment, and Sanctions Movement,” the policy document of our party bluntly stated.
Advertisement
The platform also strongly endorsed the two-state solution and Israel’s right to have its capital in Jerusalem, stating: “We will continue to work toward a two-state solution of the Israeli-Palestinian conflict... While Jerusalem is a matter for final status negotiations, it should remain the capital of Israel, an undivided city accessible to people of all faiths.”Meanwhile, 28 of the 30 Jews elected to Congress are Democrats. This is no accident. This group routinely advances the cause of Israel, and includes the Senate minority leader as well as top members in the key committees impacting the US-Israel relationship.It’s worth remembering that anti-Israel sentiment in the United States comes from both the far Right and the far Left. Louis Farrakhan, who is not even a Democrat, has been pushed back on repeatedly by party officials and elected representatives for his ugly, divisive rhetoric on Israel. Ann Coulter, an outspoken booster of the current president, complained about Republicans’ attention to Israel during the last presidential primary, writing on Twitter: “How many f–ing Jews do these people think there are in the United States?”We as Jewish Democrats are well-positioned to bring this perspective to the conversation, and still act within a party that solidly supports Israel and the bond between the US and Israel. Advancing this mission is a driving reason why the Jewish Democratic Council of America (JDCA), which I am honored to chair, was founded.At JDCA, we’re committed to helping elect and support Democrats who reject the extremes and speak to the pro-Israel values we see as intrinsic to our party and the country at large. We are confident that the Democratic Party will always reflect our pro-Israel perspective.The author, a former US representative (D-Florida), is the chair of the Jewish Democratic Council of America.