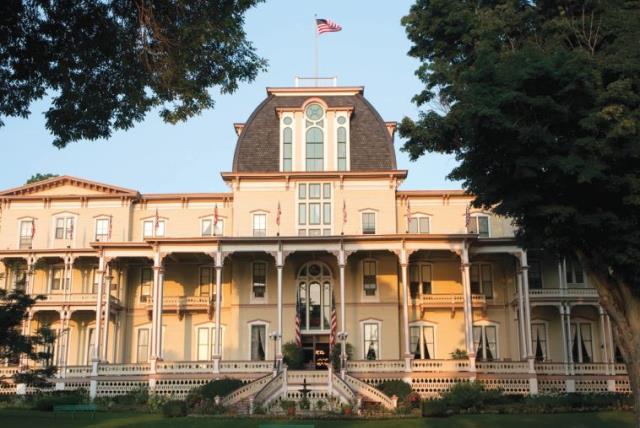 THE 150-ROOM historic hotel overlooks Chautauqua Lake and has been a gathering place for thousands over the years, including 10 American presidents
(photo credit: STACEY MORRIS)

The historic Chautauqua Institution comes alive in summer with over 2,000 scheduled activities.

The oblong park is literally the epicenter of the grounds, with people of all ages congregating around the giant fountain, reading quietly on park benches or enjoying picnic lunches on the grass. Think of it as the American version of the Italian piazza. More than just a park, Bestor Plaza is bordered by a ring of restaurants and boutiques, the post office, a bookstore and a two-story library.The Lucille Ball Desi Arnaz Museum and Center for Comedy
www.lucy-desi.com Approximately 24 km. south of the Chautauqua Institution is Jamestown, the birthplace of comedy legend Lucille Ball.The museum pays homage to the career and enduring legend of perhaps the most beloved comedienne of all time, as well as her husband, Desi Arnaz. There are recreated sets from DesiLu Studios, costumes, Emmy Awards and even a recreation of Ricky Ricardo’s iconic Tropicana Room.The Lake Erie Wine Trail
www.lakeeriewinecountry.org The wine trail along nearby Lake Erie (about 20 minutes away) boasts 24 wineries, all of which make for a day of pleasant – and romantic – meandering. There are also nearly a dozen lakeside restaurants along the trail. Start at the Grape Discovery Center and proceed from there; www.grapediscoverycenter.com.Midway State Park
nysparks.com/parks/167/details.aspx Located across the lake from the Institution, Midway is one of the oldest continuously running amusement parks in the country.Established in 1898 as a trolley park, Midway features a vintage carousel, bumper boats, miniature golf, an arcade, kiddie rides, food vendors and go-carts.Panama Rocks Scenic Park
www.panamarocks.com Famous for its geologic rock formations, the park is a 15-minute ride away from the institution and features hiking trails that meander through ancient ridges of rock-forming caves, towering rocks, passageways and crevices. All of this is bordered by scenic tree foliage, and a backdrop of moss and ferns.Chautauqua Golf Club
www.chqgolf.com Open since 1914, the private club welcomes vacationers for a day or week of golfing on the beautifully groomed, 18-hole courses designed by Seymour Dunn and Donald Ross.Chautauqua Bike Rental
(716) 357-9032 The Chautauqua Institution’s grounds are ideal for leisurely bike rides through the hilly property, not for only a good cardio session but also to take in the many points of interest such as Bestor Plaza, the Athenaeum Hotel, the amphitheater, the Hall of Philosophy and the Miller Bell Tower at the edge of Lake Chautauqua.Chautauqua Sports Club
www.ciweb.org/recreation-sports-club A host of water sports can be enjoyed here, including swimming, kayaking, paddle-boating or canoeing an afternoon away. If dry land is more your comfort, check out the croquet, shuffleboard or lawn bowling.Chautauqua Youth Club
www.ciweb.org/youth Think of it as a day at summer camp for the kids. With organized activities ranging from crafts and nature walks to swim lessons and competitive sports, it’s an ideal way to develop children’s skills and independence, leaving adults with some much-needed free time.Activities are divided into age groups ranging from preschoolers through high school.DINING The Brick Walk Cafe A popular breakfast and lunch spot right on Bestor Plaza, the cafe is famous for its ice cream creations, as well as a variety of salads, soups, burgers, and hot and cold sandwiches.Athenaeum Hotel
www.athenaeum-hotel.com Breakfast and lunch buffets are served daily.The hotel’s tapas and wine hour is from 4:30- 5:30 p.m. daily, and includes small-plate servings of hummus and artisanal cheeses.The dinner menu ranges from ginger chicken pot-stickers and Moroccan chickpea stew to crispy veal schnitzel.Tally-Ho1
Set in the Tally Ho Hotel, the restaurant serves Sunday brunch and pay-per-pound breakfast and dinner takeout or eat-in buffet.A free shuttle is available to take guests to off-grounds restaurants, departing every half-hour from the main gate from 9:30 a.m. to 10:30 p.m. For a full list of dining options: www.ciweb.org/dining.ACCOMMODATIONS While gate passes never sell out, accommodations are in finite supply on the grounds – so the sooner they’re booked, the better.All accommodations within the institution’s grounds are privately owned, except for the Athenaeum Hotel and Bellinger Hall dormitory. Options include single-family homes, condominiums, apartments, hotels and inns, historic inns and rooms, and denominational houses.For more information: reservations.ciweb.org/search.cfm.Athenaeum Hotel
www.athenaeum-hotel.com The 150-room historic hotel overlooks Chautauqua Lake and has been a gathering place for thousands over the years, including 10 American presidents.Heather’s Inn
www.heathersinn.com The inn offers the best of both worlds: furnished apartment rentals with maid service and The Chautauqua Daily delivered to your door every morning. Considered one of the top locations on the grounds, it is only a block from Bestor Plaza and the amphitheater.Along with its next-door sister inn, The Maple Inn, Heather’s is open year-round.JEWISH INTEREST The Hebrew Congregation of Chautauqua (Reform) offers Kabbalat Shabbat services at 5 p.m. every Friday during the season, lakeside at the Miller Bell Tower. For more information: www.hebrewcongregationchautauqua.org.Chabad of Chautauqua will offer three Shabbat dinners throughout the summer season as well as a kosher BBQ, from 12-2 p.m. on July 12 and August 2 at the Miller Bell Tower Park, open to all.A Klezmer concert will be offered at 10:30 a.m. on Sunday, August 9 at the Anthenaeum Hotel; the concert is a joint event with Chabad and the Hebrew Congregation. For more information on Chabad of Chautauqua: www.cocweb.org or rabbi@cocweb.org.www.staceymorris.com