New fundraising campaign: Buy a weapon to kill a Jew in Israel 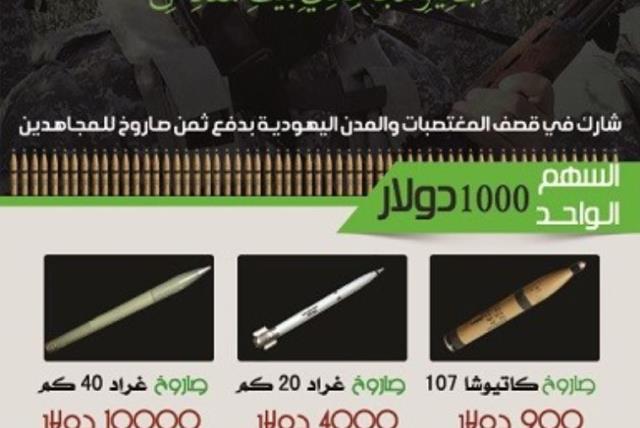 "Participate in shelling the Jewish settlements and cities by paying the price of a rocket for the mujahideen"
(photo credit: MEMRI)

Donors can select from a list of weapons at varying prices.

A campaign to fund terrorist attacks against Jews in Israel was launched a few weeks ago on Twitter and Telegram, the instant messaging service, has reported. The campaign states that it aims to "prepare the mujahideen of Bait Al-Maqdis [Jerusalem, also used to designate Palestine]... [to carry out] jihadi and martyrdom operations targeting the Jews..." and to " "liberate the imprisoned al-Aksa Mosque from the filth of the aggressing [sic] Jews," MEMRI reported.
Advertisement
The fundraiser, called al-Aksa Nafeer, meaning mobilization for jihad, seeks to collect funds for weapons and other military gear needed by the mujahadeen in Palestine in order to target the Jews and so far, a statement released by the campaign said, it has been "successful." Donors can select from a list of weapons at varying prices: an RPG rocket launcher can be bought for $3000; a sniper rifle for $6000, a PK machine gun for $5500, a Katyusha rocket at $900, a Grad missile with a range of 20 kilometers for $4000, and a Grad missile with a range of 40 km for $10,000. MEMRI described the campaign as "slickly produced" and it featured a video and various posters, and is also being coordinated via Skype and Gmail. It was not clear who was behind the campaign and MEMRI noted that instructions for donors to transfer funds are likely provided after a vetting process.
Advertisement
(An image from the campaign video. Twitter and Telegram contact information appear at the bottom, Photo credit: MEMRI)
("Participate in shelling the Jewish settlements and cities by paying the price of a rocket for the mujahideen, Photo credit: MEMRI)