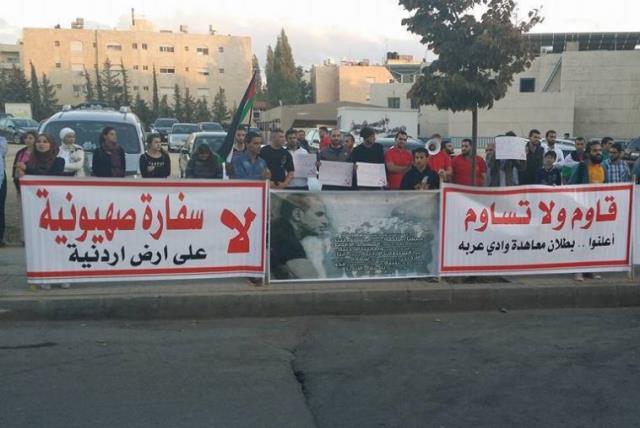 "The campaign stresses that supporting the occupier and striving for normalization with it amounts to paying for the bullets with which it kills innocent Palestinians," a campaign activist said.

"Shame on you," is the slogan of a new Jordanian campaign that has been gaining momentum in the kingdom that calls on merchants and citizens to boycott Israeli goods.On Tuesday, campaign organizers conducted a press conference in Amman, in which they stated their opposition to the official government policy on Israel adding that "economic war is no less important than military war."
Advertisement
"The campaign stresses that supporting the occupier and striving for normalization with it amounts to paying for the bullets with which it kills innocent Palestinians," Murad Kadi, a campaign activist said.  He said the campaign was distributing stickers reading "boycott the enemy" among bazaars, stores and government ministries in Jordan, in order to "caution merchants and citizens over the danger of normalization with an enemy which contaminates the blood of children and women in occupied Palestine."The campaign, initiated in January 2013, is now back in the limelight after many Jordanian merchants previously rejected it.  "Initially, the campaign faced difficulties since many merchants shut the door on us, but now the situation is different. We see our stickers calling to boycott Israeli goods on the entrance to stores and even on houses and cars," Fidaa Ramhi, a campiagn activist said.
Advertisement
A list with the "Zionist" brands that include, Pizza Hut, Mcdonald's, Pepsi, Nestle and Nike, appears on the campaign's Facebook page