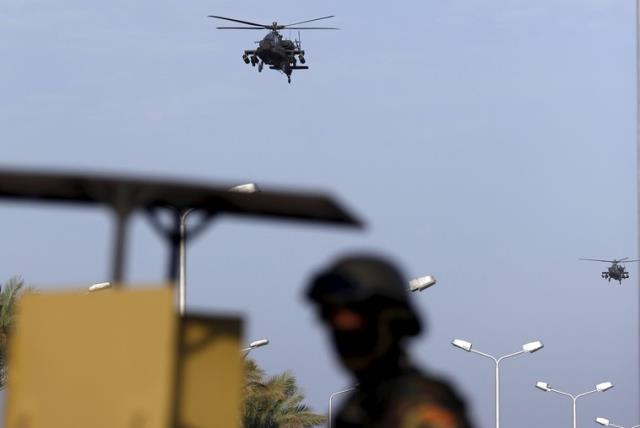 Egyptian military helicopters fly over a republican guard around the congress hall during the Arab Summit in Sharm el-Sheikh, in the South Sinai governorate, south of Cairo, March 28
(photo credit: REUTERS)

Apart from the body count, 1,873 suspects connected to militant groups were reported detained, with most arrests, some 575 taking place in November, and the least, 158, in January.

Egypt's offensive against violent militants in the Sinai Peninsula has resulted in the deaths of 725 terrorists, a new report by the Egyptian army claims.According to al-Ahram, the report, which was released on Saturday, details operations spanning the period between October 25 to April 30 of last year. It specifically details February as being the most lethal month, during which 173 terrorists were killed, and January as the calmest, with 44 on the radicals reported dead.
Advertisement
Apart from the body count, 1,873 suspects connected to militant groups were reported detained, with most arrests, some 575 taking place in November, and the least, 158, in January. November also saw the discovery and destruction of the most militant hideouts by security forces, with 1,023 such cases occuring in that month alone. An additional 800 havens were also reported destroyed in the period in question.Weapons and ammunition, the latter numbering 80,927 and composed of various calibers, were also seized.Property confiscation was also part of the offensive given the popular implementation of car bombs and hit and run tactics by militants. Cairo's security forces had apparently seized or destroyed 591 vehicles, in addition to some 1,447 motorcycles, non of whom had license plates.
Advertisement
Egypt has been locked in an escalating insurgency in the Sinai since 2011, when the its military, headed by now president Abdel Fattah al-Sisi, deposed the Islamist president Muhammad Morsi, cracking down on his Muslim Brotherhood cohorts and launching a broad effort to suppress any challenge to his rule. Most of the attacks against security forces in the Sinai, and numerous bombings across the Suez in Egytp's urban centers have been claimed or attributed to an Islamic State linked jihadist group formerly known as Ansar Bayt al-Maqdis, and now calling itself the Sinai Province.