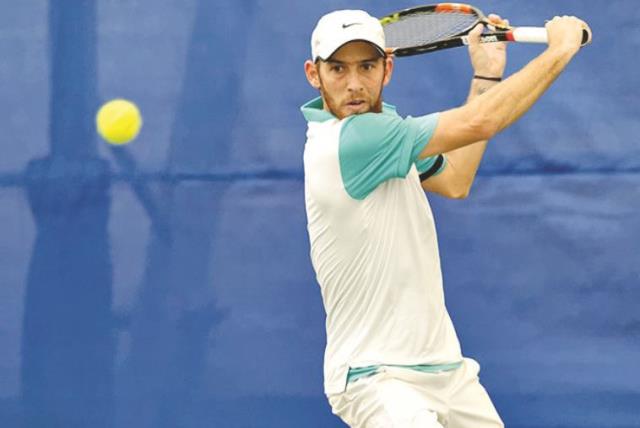 The top seeds made it safely through to the second round.

The main draw of the Israel Open ATP Challenger Tour tournament in Ra’anana got underway on Tuesday, with the top seeds making it safely through to the second round.No. 1 seed, Evgeny Donskoy, ranked No. 82 in the world, needed just 47 minutes to beat Israeli wildcard Daniel Cukierman 6-1, 6-0 and will face Russian countryman Daniil Medvedev (255) in the second round.
Advertisement
The local favorites will enter the fray on Wednesday. Fresh off claiming his 20th career title on the Challenger circuit in Shenzhen, China on Sunday, Dudi Sela (84) will face countryman Tal Goldengoren (815) in the first round, with the latter receiving a wild-card.There will be another local derby in the first round, with Amir Weintraub (197) to play Edan Leshem (570).Meanwhile, Serena Williams’ bid for a ninth Miami Open title came to a shock end when the world number one was beaten 6-7 (3), 6-1, 6-2 in the fourth round by 15th-seeded Russian Svetlana Kuznetsova on Monday.The loss on the Miami hardcourts was the first since 2012 for Williams, who had swept the last three titles in her unofficial home tournament.
Advertisement
“I’m really thrilled,” said Kuznetsova after registering her first win over Williams since 2009. “I’m sorry fans, who are disappointed that Serena’s not going to keep playing, but for sure she’ll be at more events than here.“I’m really happy with my performance. I tried to stay at a good level the whole game. I think I did that pretty well and I’m happy with the way I served today.”It was a day of dramatic upsets at Crandon Park, as Williams stepped onto the Stadium court for her Round of 16 match immediately after world number two Agnieszka Radwanska of Poland was tripped up by 19th-seeded Swiss Timea Bacsinszky 2-6, 6-4, 6-2.Fourth-seeded Spaniard Garbine Muguruza was also sent packing, falling 7-6 (6), 7-6 (4) to 13th-seeded Belarusian Victoria Azarenka, still in top form following her victory this month at Indian Wells.In the men’s event, Andy Murray, accustomed to going deep into the Miami Open, was derailed in the third round on Monday, falling 6-7 (1), 6-4, 6-3 to Bulgarian Grigor Dimitrov.“To be honest, I just played better in the big moments today,” Dimitrov told reporters. “I had quite a few opportunities and I used them."“Even though I lost the first set, I kept good composure. I had to stay in the match and I had to be really focused. I’m happy with all those things.”Next up for Dimitrov will be Frenchman Gael Monfils, who hit 13 aces in a 6-3, 6-4 win over Pablo Cuevas.Reuters contributed to this report.