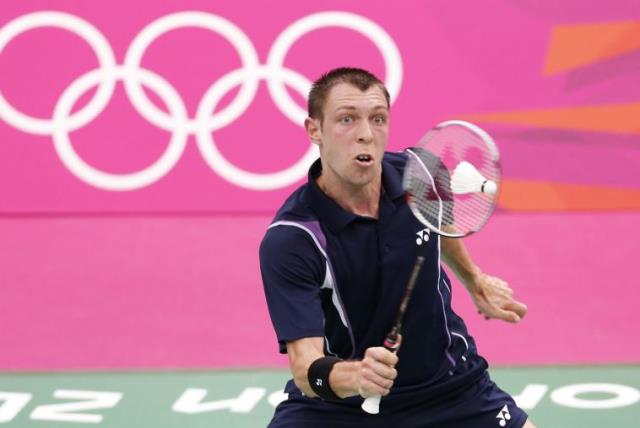 The 26-year-old Israeli, who took part in the London 2012 Olympics, lost 21-14 to Jen Hao Hsu of Taiwan in the first round, a day after he arrived in the world's most populous Muslim country.

Advertisement
After finally prevailing in his long battle for a visa to play in the world badminton championships in Jakarta, Indonesia, Misha Zilberman's participation in the competition lasted just 34 minutes on Tuesday.The 26-year-old Israeli, who took part in the London 2012 Olympics, lost 21-14 to Jen Hao Hsu of Taiwan in the first round, a day after he arrived in the world's most populous Muslim country.The Israeli flag wasn't present in the arena alongside the flags of the rest of the participating countries on Tuesday, with Zilberman's match being moved forward to the start of the day due to security concerns.Zilberman spent recent weeks practicing in Singapore while waiting for his visa request to be approved. Despite filing his initial application six months ago, Zilberman was turned down by Indonesian officials time and again until Badminton World Federation Secretary General Thomas Lund flew to Singapore in order to escort the Israeli to Indonesia on Monday.
Advertisement
Israel and Indonesia do not have formal diplomatic ties and it is difficult for Israelis to visit the country."A huge thank you to all the people who supported me and joined my battle and ultimately helped sports beat politics," Zilberman wrote on his Facebook page. "Many thanks to the Olympic Committee of Israel, Alex Gilady (International Olympic Committee member) and the Israel Badminton Association which helped me get here. Without everyone's help I wouldn't be here." Zilberman explained why he chose to take part in the competition despite a far from ideal preparation for the event."My coach and I decided that despite the difficult situation, and even though we knew that I wouldn't be able to display even 50 percent of my ability, we must show everyone that their assistance was helpful and that sport won again. I'm proud to represent Israel."