Championship comes down to last round 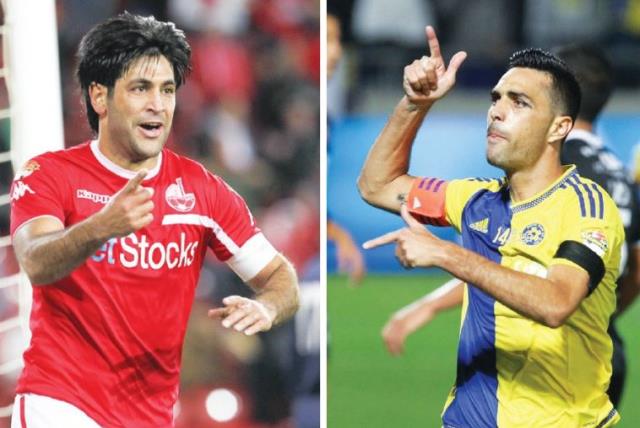 One way or another, Premier League history will be made on Saturday night.Either Hapoel Beersheba will claim its first championship in 40 years or Maccabi Tel Aviv will become just the second team in local soccer history to win four straight championships, the first since Hapoel Petah Tikva took five consecutive league titles between 1959 and 1963.
Advertisement
Beersheba controls its fate, knowing that a win over Bnei Sakhnin at Turner Stadium will give it a first league title since 1976. Maccabi Tel Aviv will have to beat Maccabi Haifa at Bloomfield Stadium and hope Beersheba doesn’t win in order to extend its championship streak.Should Beersheba draw and Tel Aviv win, the teams will be tied on points, but Maccabi will be crowned champion due to its superior goal difference.Beersheba could have already clinched the title last weekend with a win in Haifa. However, it suffered its first league defeat in nearly eight months, losing 2-1 to Maccabi Haifa following Eyal Meshumar’s stoppage- time winner. Tel Aviv beat Beitar Jerusalem 2-0 to cut the gap at the top to two points.This will be the first time since the 2009/10 season that the title race will be decided on the final weekend. Maccabi Haifa entered that day needing a win at Bnei Yehuda to secure the title, while Hapoel Tel Aviv visited Beitar Jerusalem knowing it doesn’t control its destiny.
Advertisement
However, it was Hapoel which celebrated at the end of the night after Haifa was held to a 1-1 draw by Bnei Yehuda while Tel Aviv beat Beitar 2-1 thanks to a stoppage-time goal.Current Maccabi captain Eran Zahavi scored that dramatic winner for Hapoel, while Bnei Yehuda’s goalkeeper at the time, Ran Kadosh, who made some crucial saves to deny Haifa, will be starting for Sakhnin against Beersheba on Saturday.“I don’t think there is much to say before a match like this,” said Beersheba captain Elyaniv Barda. “We need to forget about everything that happened until now as we are facing one game at home which we have to win.”Beersheba coach Barak Bachar is confident his players can block out the craze that has gripped the city over recent weeks.“At the end of the day we need to come and play and win the game. We are a good enough team to do that,” said Bachar. “Maybe we were a little confused in the match against Haifa, but that is history now. We know we need to win the game to take the championship. Sakhnin will not do us any favors. But we believe we are ready and that we will do this.”Sakhnin has nothing to play for and will end the season in fifth place regardless of Saturday’s result. Haifa can climb up to third place should it beat Tel Aviv and Beitar Jerusalem fail to defeat Hapoel Ra’anana in Saturday’s other match.Haifa and Tel Aviv will meet again on Tuesday in the State Cup final at Teddy Stadium in Jerusalem.“We have to win the game against Haifa but the championship is not in our hands,” said Maccabi coach Peter Bosz, who is expected to leave Tel Aviv for Dutch giant Ajax following the cup final.“Last week was something special. I wasn’t happy with the first half but we scored some goals in the second half and when we heard that Haifa scored against Beersheba it was fantastic. We weren’t counting on them losing, but it now gives us a chance. They will absolutely feel the pressure. That is normal.”