Netanyahu: Iran leading a campaign of 'conquest and subversion' around Israel's borders 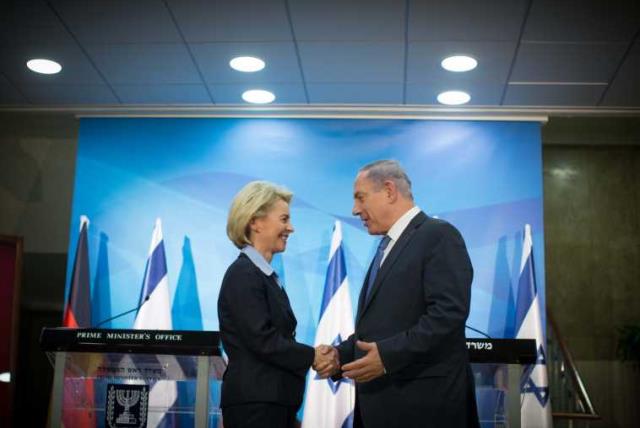 Advertisement
Prime Minister Benjamin Netanyahu on Tuesday asserted that the threat emanating from the "imperial and theological ambitions" of Iran's "ayatollah regime" poses the greatest threat to the region. Speaking in Jerusalem with German Defense Minister Ursula Von Der Leyen, the prime minister said that Israel views Iran's quest to create an "empire" coupled with its nuclear ambitions as the greatest security challenge to the Middle East.
PM Netanyahu and German defence minister statements
"They are leading a campaign of conquest and subversion throughout the Middle East, Yemen and around the borders of Israel, not far from our border in the Golan Heights, and Gaza," the premier stated.  Netahyahu told the German defense minister that Israel wanted a "better deal" on Tehran's disputed nuclear program than the framework agreement reach in negotiations in Lausanne, Switzerland on April 2.
Advertisement
"We think a better deal is required than the one proposed in Lausanne. And I believe that this is important for our common future and our common security," Netanyahu said, adding that "Every time that I've had the opportunity to speak to Chancellor Merkel, I was impressed with her understanding of theses great challenges. And I look forward to discussing this with you and how to further advance our cooperation." saying it was important for Germany to listen "very precisely" to Israel's concerns over a nuclear deal with Iran.Meanwhile, Von Der Leyen said she had engaged in "intensive" dialogue about the preliminary Iran accord with her Israel counterpart, Defense Minister Moshe Ya'alon. "Still there is only a framework and it is important for us to listen very precisely what Israel's concerns and suggestions are, when the details of a treaty are being negotiated. A treaty, which aims to create transparency and control," she said at a joint news conference with Netanyahu held in the premier's office.Iran, which denies seeking nuclear weapons, has said sanctions must be rescinded as soon as any final deal is signed. The United States wants a gradual lifting of restrictions - a big sticking point left unresolved so far.The framework deal did not spell out all details about the future of Iran's atomic research and development program, the exact scope of the UN atomic watchdog's monitoring regime, and what kind of uranium stockpile Tehran will be allowed to keep.Tehran's top nuclear negotiator said on Tuesday he hoped diplomacy resuming this week will yield results before a self-imposed deadline for a final deal to curtail Iran's atomic program expires at the end of June.During her two-day state visit marking the 50th anniversary of German-Israeli diplomatic relations, Von Der Leyen also visited Yad Vashem Holocaust Memorial museum in Jerusalem earlier on Tuesday and held meetings with Holocaust survivors and wounded IDF soldiers.