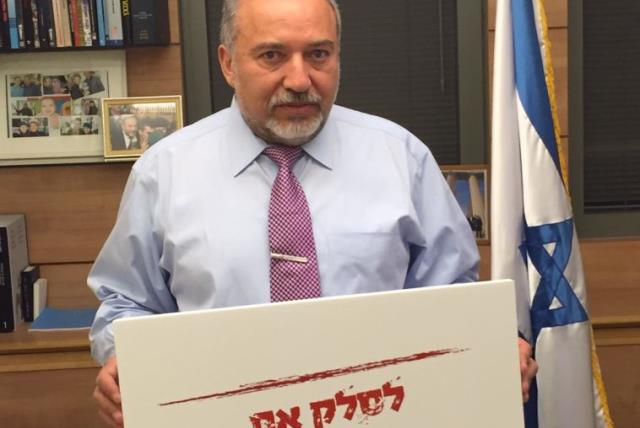 Yisrael Beytenu leader Avigdor Liberman launched a Facebook campaign on Wednesday calling for the public to pressure MKs to support his bill that proposes to strip MK Haneen Zoabi (Joint List) of lawmaker status.Liberman’s bill proposes stripping the High Court of Justice of its authority to overturn Central Elections Committee (CEC) decisions to disqualify lists and candidates. Critics say the committee is comprised of politicians.
Advertisement
The bill is seen as having little chance of passing, partly since Liberman is in the opposition.“The Central Elections Committee has disqualified Balad [Zoabi’s party that joined with other factions to form Joint List] for contravening a law that disqualifies those who support terrorism or armed resistance against Israel from serving in its parliament,” Liberman said in a video address he published on his official Facebook page.Liberman decided to propose the bill citing the High Court repeated overturning of CEC decisions to disqualify Balad.Justices have upheld her right to free speech and found no grounds for accusations she supported violence.
Advertisement
Liberman said, “there is no doubt that in the party of the traitor and spy Azmi Bishara [former MK and head of Balad currently in exile in Qatar] and his heir Haneen Zoabi openly break the law and it is time that they pay the price.”In response, Zoabi called Liberman “a dangerous political figure,” adding: “He is trying to win popularity by using incitement and propaganda against me and the public that I represent.”“I represent justice, democracy and human rights, and Liberman represents fascism and the politics of hate,” Zoabi said.Liberman’s campaign “will not affect my fight for the values that I believe in: justice, equality, freedom and democracy.” She also vowed to continue the “just struggle.”Zoabi has often captured the headlines in Israel and abroad for controversial positions against its policies and IDF actions. At an event in Amsterdam last month commemorating Kristallnacht, or the pre-Holocaust pogroms across Germany, Zoabi compared Germany of the 1930’s with modern Israel.She was also aboard a ship in May 2010 where soldiers killed 10 Turkish activists who attacked them when they boarded their vessel, the Mavi Marmara, to enforce a maritime blockade of Hamas-ruled Gaza.Zoabi has said she tried to mediate peacefully between the sides and had no role in any violence.Liberman expressed his “dismay” at the government for not supporting his bill.“So I am asking you, those to whom Israel is important, and those who believe that supporters of terrorism should not sit in the Knesset to ‘like’ this post and to share it and to demand that the ministers in the government and the MKs of the Likud, Bayit Yehudi, Kulanu, Shas and United Torah Judaism to support my proposed law,” Liberman wrote.“Together we will kick the supporters of terrorists out of the Knesset,” he added.Meretz MK Esawi Frej said that Liberman, not Zoabi, should be the one kicked out of Israeli politics.“Liberman, who for years has contaminated Israeli politics with corruption and fascism, is the one who should be kicked out of the Knesset and public life. Liberman’s proposed legislation seeks to eliminate the remaining shreds of democracy that are left here and to turn us into a democracy in the style of his friend [Russian President Vladimir] Putin, which stamps out opposition and muzzles any opinion he doesn’t like,” Frej said.