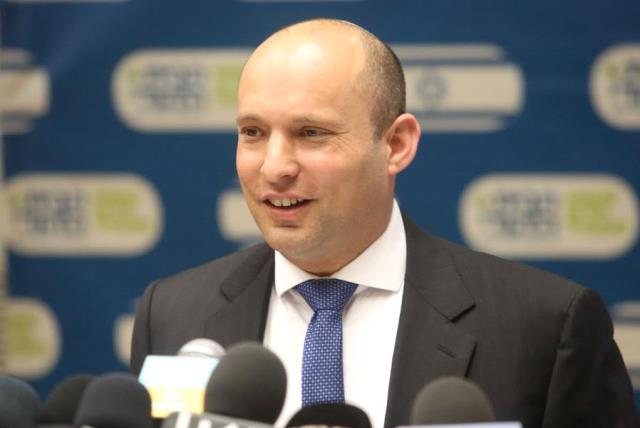 Prime Minister Benjamin Netanyahu's government could fall over his three criminal investigations, Bayit Yehudi leader Naftali Bennett indicated Monday night, in an interview with the new public broadcasting corporation, Kan.Bennett was interviewed on the channel whose formation Netanyahu tried to prevent. The channel's anchorwoman Geula Even-Sa'ar is the wife of former interior minister Gideon Sa'ar, who sees himself as a future successor of Netanyahu as Likud head and prime minister.
Advertisement
When Even-Sa'ar asked Bennett if he would consider removing his party from the government due to the prime minister's probes, he said it would depend on the serverity of the charges. None of Netanyahu's coalition partners have made such a statement on any of his investigations until now.Netanyahu is being investigated on allegations that he received expensive gifts from international billionaires, colluded with a newspaper owner for better coverage and enabled the purchasing of unnecessary and expensive German submarines from a company that employed his confidant and relative.Bennett also continued to criticize Netanyahu's handling of the new administration of US President Donald Trump, saying that the govenment had not "changed its mode" since the previous administration of Barack Obama on issues like Jerusalem.
Hours earlier, Bennett appeared to blame Netanyahu when he told his Bayit Yehudi faction that Trump spoke positively about settlements and Jerusalem during the election campaign in an effort to impress his voters, but since then had changed his mind.
Advertisement
"In his campaign, he more than once praised settlements across Israel, spoke about united Jerusalem under Israeli sovereignty and about transferring the US embassy to Jerusalem," Bennett said. "These statements were made for his voters. Since he was elected, a change has happened in the spirit of his words and the reasons for the changes are not entirely clear." Bennett advised Netanyahu to follow American business practices of telling the truth and asking for what is wanted. "The truth is that anyone with a brain knows that the creation of a Palestinian state in addition to Gaza isn't going to happen, and we should say it," Bennett said. "Jerusalem must remain united under Israeli sovereignty only, without being divided geographically or in its sovereignty, just like Paris and Washington. If we say this with determination, they will appreciate us."Defense Minister Avigdor Liberman criticized Bennett's approach in a meeting with his Yisrael Beytenu faction."It would be fit to [relay opposition to American policies] in proper forums with the prime minister, not in the media," Liberman said. "The media fight doesn't strengthen Israel. It doesn't help our negotiations with the Palestinians. This administration is friendly. It's not our first disagreement with the US. We need to overcome our instincts and handle it respectfully, not in the media."Other right-wing politicians also defended Trump and said they had not given up hope that he would be a very pro-Israel president."Initiating a regional conference with Saudi Arabia is very important for Israel," said Minister-without-Portfolio in the Prime Minister's Office Ayoub Kara (Likud). "Jerusalem is not as relevant right now, and I believe the US embassy will be moved."Likud MK Oren Hazan said Trump does not yet know who Palestinian Authority chairman Mahmoud Abbas really is. "He believes the Palestinians lies," Hazan said. "But I still believe he will be a good president for Israel. I hope he will wake up soon, in time to stop whatever process he might start."Yesh Atid Chairman Yair Lapid reiterated the call to move the US embassy from Tel Aviv to Jerusalem, saying on Monday: "I join the prime minister's call to the president of the United States to move the US embassy to Jerusalem." "We cannot let threats of disorder affect us," he said as he explained that his party came specifically to Ammunition Hill to hold its faction meeting. "Israel and the United States do not determine policy based on threats but on what is right and what is just. And there is nothing more just - historically and morally - than our connection to Jerusalem."Joy Bernard contributed to this report.
Advertisement
Advertisement
Breaking News World News Iran News Coronavirus U.S. POLITICS Kabbalah
Advertise with us Terms of Service Privacy Policy cancel subscription
Copyright 2021 Jpost Inc.
Designed by DANIEL CHEN