Police Confirm: Driver tampered with crash evidence 'as bodies lay at the scene' 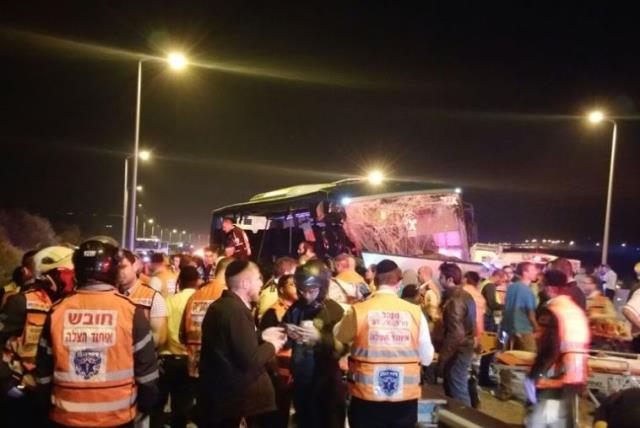 Israel Police’s Traffic Department head Asst.-Ch. Yaron Beeri told a special Knesset session on Tuesday that the bus driver involved in the deadly Route 1 crash on Sunday was indeed tampering with the vehicle’s tachograph shortly after the crash.“As dead bodies were lying at the scene and the injured were screaming for help, the driver did something to the tachograph. It did not happen on its own,” he said.
Advertisement
The tachograph records and stores the vehicle’s speeds and distances covered for a period of 24 hours.Beeri said “it is completely clear the driver’s behavior was irregular,” adding that police are in the process of investigating why this was the case.The police official was speaking at the second of a series of special Economic Affairs Committee sessions focusing on dangerous roadways in the country and preventing crashes.The session’s first meeting last week came the day after a serious crash on Route 31 killed four people.
Advertisement
Police said that while driving the 402 Egged bus from Jerusalem to Bnei Brak, driver Haim Biton “left the right lane and began driving on the shoulder and did not notice a disabled truck on the side of the road and struck it with great force.”Police said he apparently did notice the truck because he swerved to the left to avoid the truck, hitting the stationary vehicle’s rear left side.“The bus, fortunately, was not completely full and a large portion of passengers were sitting on the left side of the bus,” he told the committee. Almost all the passengers sitting on the right side of the bus were killed or hurt as a crane mounted on the back of the truck gutted the right side of the bus.Turning his focus to the danger of smartphones and distractions while driving, Beeri said “everybody makes mistakes in judgment while driving and we are all busy with our smartphones – this is killing us.” He said police continue to see crash victims with their phone by their legs, which means they were using their phone at the time of the crash.“It’s hard to prove a clear cause and effect,” he said, “but there is no doubt that one of the central factors is the use of cellphones while driving and walking.” He said pedestrians too are “walking themselves to their own deaths.”Also speaking at the session was Egged chairman Elhanan Erez, who expressed his deep condolences over the crash. He said the company has begun performing driver surveillance, especially for new drivers.Ben Hartman contributed to this report.