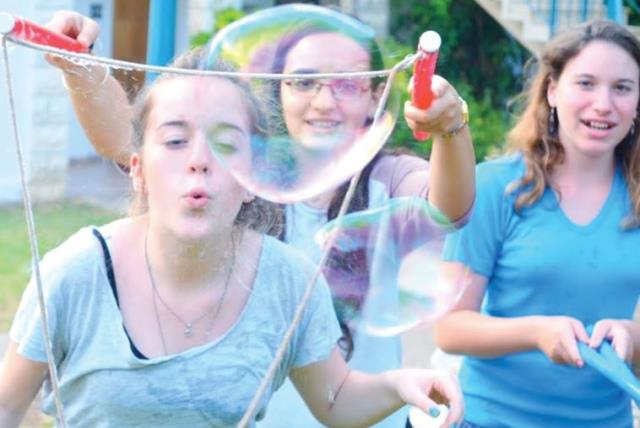 CAMPERS AT Camp Koby enjoy a bubble-making workshop recently at their home base in Kibbutz Yehiam
(photo credit: DANIEL MANDELL)

Seth and Sherri Mandell founded the camp following the loss of their son Koby, who was stoned to death together with his friend Yosef Ish Ran by Palestinian terrorists in May 2001.

Some 250 children from bereaved families descended on Eilat for a pre-Passover camp held by the Koby Mandell Foundation.The foundation, which has been running camps for bereaved children since 2002, was established by Seth and Sherri Mandell following the loss of their son Koby, who was stoned to death together with his friend Yosef Ish Ran by Palestinian terrorists in May 2001.
Advertisement
“On a deeper level we started [the foundation] because we felt Koby’s power in the world – the good that he would have done – was stolen from the world, and we wanted to find a way to replace that,” Seth Mandell told The Jerusalem Post last week.“It was a healing process for my wife and I to give meaning to what happened to our son,” he said, “a means of keeping us in contact with him and doing something.”Mandell said that while there were numerous programs and assistance for grieving adults, children were often left out of the healing process. The foundation’s camps are a means to both provide the children with some fun and a break in their daily routines and also to help them heal.“We thought of developing a camp that Koby would’ve liked, that would help kids like him to heal and to give them hope and to grow into better people,” he said.
Advertisement
As such, the foundation began its first camp in the summer of 2002, a little over a year after Koby’s death, and since that time has expanded to include Passover and Hanukka camps.“All of our programs have three components: They are a lot of fun, they include a lot of social integration – these kids become each other’s best friends – and there is therapy involved in each program,” said Mandell.The foundation works with hundreds of therapists, mostly in creative arts therapy, which includes therapy through art, music and drama. The therapists help the kids heal and express themselves during the camps.“In the last 15 or so years we’ve touched and helped thousands of bereaved families,” he said. “Every time a kid smiles, or a mother goes back to being a better wife and mother to her family, it really affects Koby’s soul.”Mandell said that during the summertime, he and his wife, Sherry, speak to the kids about Koby.“We tell them why we started the camp and we try to bring him into the process with the kids,” he said. “This is like a memorial – usually memorials are static; this is a living memorial to who he was as a person.”True to the foundation’s mission, the two-day Passover camp in Eilat saw the children, between the ages of eight to 18, “spending a lot of time near the water” – engaging in fun water activities, boating, ice skating and enjoying free time on the promenade.“Mostly the kids get to hang out with their friends, and that is really the point – the connection the kids make with each other and the counselors so that they can reestablish their connection [with each other].”A., a 10-year-old from Jerusalem who lost a sibling in a terrorist attack, said that “this camp gave me the chance to just enjoy my vacation in a way that allows us to talk about what is difficult but also just be normal children.“I know that my Passover will be much more fun because I was able to have this experience,” he added.Mandell explained that if funding is available, the children are invited back every year to attend both the summer and additional holiday camps.“This really creates a community and a support network for these kids, to be able to relate to what happened to them with other people who have been through the same thing, so that they can heal and meet the tragedy and see that there are other people dealing with it, and that they are not alone,” he added.While the foundation fully subsidizes the camps, there are years when they are unable to garner the funds to hold both Passover and Hanukka camps.“Depending on the financial backing, we hold the Hanukka or Passover camp. If we can’t find funding, then we aren’t able to hold it. This year we were lucky,” he said.Mandell explained that in the beginning the foundation worked only with victims of terrorism, but said they saw the need to expand their efforts to also help others who have lost a mother, father, or sibling to tragedy.N., a 12-year-old from Tel Aviv who lost her mother to an illness, said: “Passover is a hard time of year because we’re reminded about what we lost. It helps to be around other people who understand what we’re going through, and just be able to relax and enjoy our time.”Mandell added, “The thing that people need to realize is that our whole country is traumatized by terrorism and car accidents. When a child loses a family member or a mother who loses a child, it doesn’t only affect that child. It affects the whole community. When we take the child out of the community and provide them with fun activities for a few days, it brings light not only to the child and to the family but to the whole community.”He said that parents and children of those who were killed will never have closure, but through the grief, he sees hope for the future.“Expressing bereavement doesn’t mean you are weak and doesn’t mean you are imposing on someone. It means you are expressing who you are as a person,” he said. “As a society we should provide a place for bereavement. We need to treat the children and support them as they go through their grief so that they can become the future leaders of society. They know the worst, so they will also know the best.”