The campaign will use Idan Barzilay's artwork to create colorful animations that in turn will help bring people with similar opinions or beliefs together, in an artistic way.

Advertisement
The global dating app OKCupid will be launching an ad campaign called "Ask Yourself," which will highlight important dating issues for Israelis, collaborating with Israeli artist Idan Barzilay for the campaign's artwork. The campaign will use Barzilay's artwork to create colorful animations that in turn will help bring people with similar opinions or beliefs together – in an artistic way. Established in 2004, the OkCupid dating app is available in over 110 countries. It is often ranked as the most downloaded dating app in Israel, and has seen downloads amongs LGBTQ+ users double in recent months.“OkCupid connects people based on their shared opinions, values and beliefs,” said CEO Ariel Charytan. “In Israel, daters are matching on the issues that are most important to them, like the cultural impact of military service, the role of religion, the complex political environment and evolving family norms.”
Advertisement
Set to roll out later this week, OKCupid will try to make the campaign as visible as possible, with ads on all dominant social media platforms, partnerships with local personalities Shirley Levy, Melech Zilbershlag and Renny Grinshpan, and the company's first television presence in Israel, with appearances on prime time advertising spots.
OkCupid ad in Israel with Idan Barzilay's artwork. The ad reads: "It's totally OK to want to start a family with someone who calls you a bro."
Some examples of statements that will appear in the animated ads that are meant to represent hot topics on the minds of young Israelis are: "It’s Ok to fight for someone who wasn’t as 'combatty' as you in the military," or "It’s Ok to go out with someone that studies Hebrew literature but curses in Arabic," and "It’s Ok not to go out with someone that won’t go out of Tel Aviv." Barzilay explained that what brought him to participate in the OKCupid campaign is "its appeal to a broad spectrum of people. Unlike most dating applications, OkCupid is inclusive and allows users to connect based on mutual interests,” Barzilay said, adding that the statements in the campaign, meant to draw people with similar interests together, "invoke thought, openness and complete acceptance without judgement." 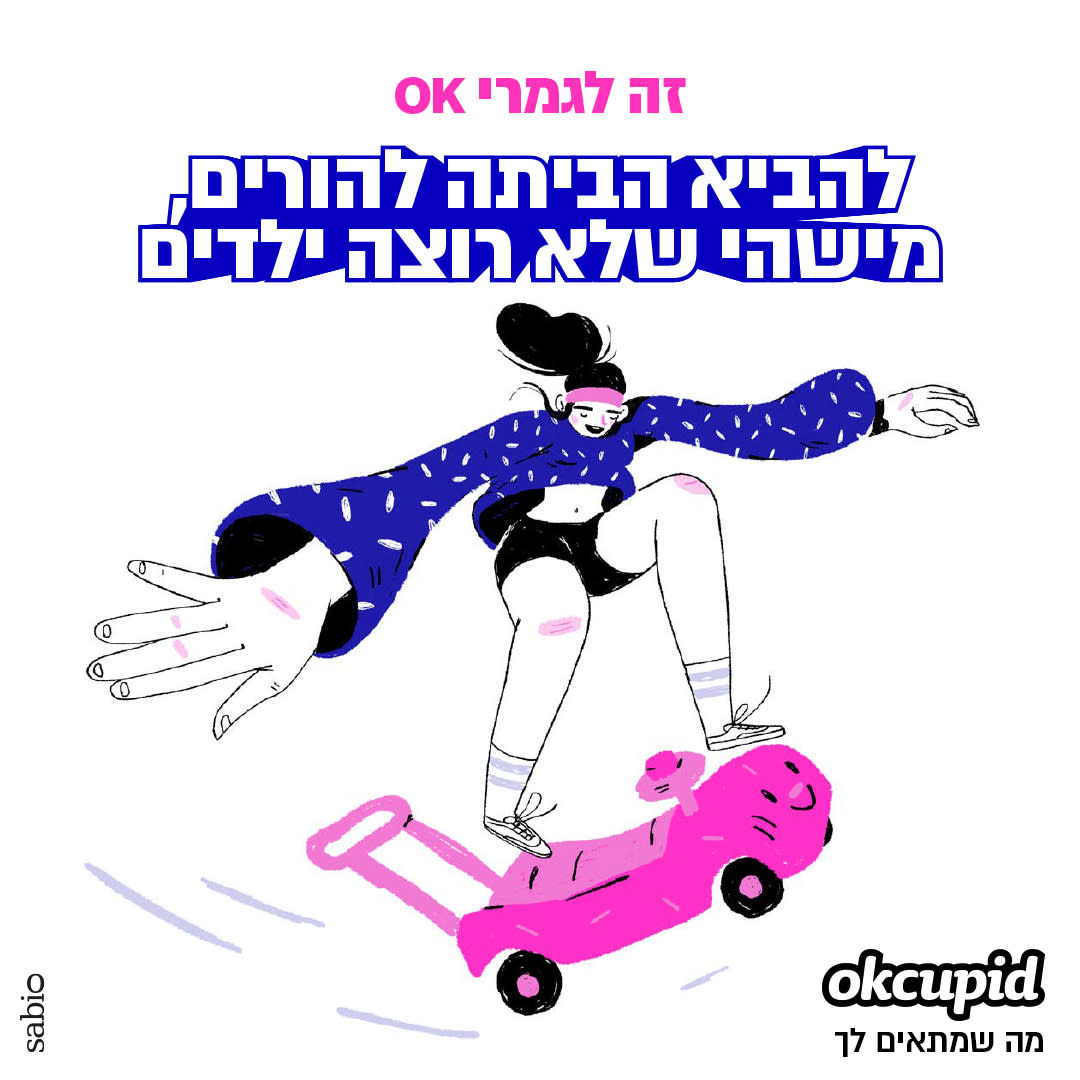 OkCupid ad in Israel with Idan Barzilay's artwork. The ad reads: "It's totally OK to bring home someone who doesn't want kids."Connecting his colorful artwork to ideas of pluralism and self-acceptance, Barzilay concluded: "I hope my art for the campaign conveys to all Israeli daters that it’s ok to be yourself, with flaws and quirks, and find a match."The "Ask Yourself" campaign was made possible in Israel thanks to the Sabio ad and marketing agency, which according to its website, is a "marketing technology company that provides leading brands with the perfect balance between technology and creativity."Almog Dassa Zill, creative director at Sabio, said that: “Our goal was to take the provocative campaign launched in North America and bring it to life in Israel through statements that hit home with Israeli daters, and animations that entice viewers.”