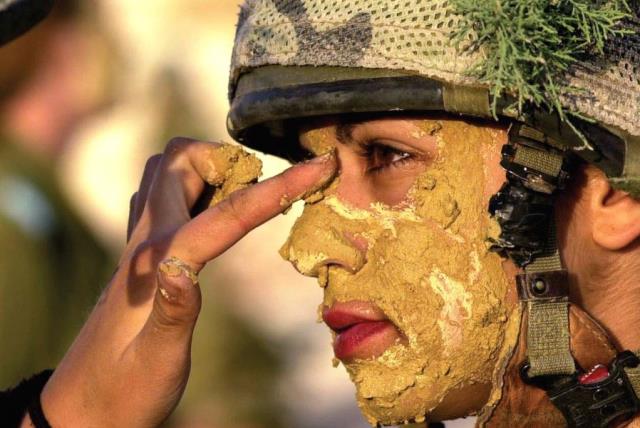 The campaign involves high-school girls getting photographed with a message calling on the Education Ministry “not to interfere” with their education.

A campaign has been initiated by conservative national-religious elements in opposition to proposed funding from the Education Ministry to organizations that provide help and guidance to young religious women who want to enlist in the IDF.These services are provided in particular by the Aluma NGO, which sends staff to speak in high-schools to girls interested in joining the army, to provide them with information and other services to help them make their decision.
Advertisement
The campaign involves high-school girls getting photographed with a message calling on the Education Ministry “not to interfere” with their education.Religious girls hold a sign that says "Don't interefere with our education. We believe in national service"The guidance policy, which is yet to go into effect, has been strongly criticized by conservative elements in the national-religious community who fervently oppose religious women serving in the IDF for several religious and societal reasons.The conservative-minded Hotam organization says that hundreds of students from the state religious school system have participated in the campaign against the slated funding policy, and has provided pictures of school girls holding up signs saying: “Don’t interfere in our education! We believe in national-service.”
Advertisement
The national-service program (sherut leumi) places religious women in various civilian programs, such as schools, old-age homes and hospitals, as an alternative to military service for which religious women have traditionally gained exemptions due to religious considerations.Despite this, large numbers of young women from the national-religious sector have been enlisting in the IDF in recent years, including from the community’s mainstream and from prestigious high-schools, a phenomenon that has been bitterly opposed by leading rabbis in the community.“The Education Ministry under Shai Piron [during 2013-2014] managed to understand that it is not possible to force perspectives on girls in the state-religious system that are not commensurate with their values,” said Amital Bareli, director of the Hotam organization.“It’s a shame that the current education minister has capitulated to pressure from pluralist organizations that are influencing the education of religious girls,” he continued in reference to current minister and Bayit Yehudi leader Naftali Bennett.“Hundreds of girls have decided to initiate a protest which is gaining momentum, and we are calling on the minister to prevent the intervention of foreign bodies that are acting out of motivations which contradict the position of the majority of the national religious sector.”Aluma director Yifat Selah said, however, that her organization does not seek to interfere in anyone’s education, but simply provide information to those who want to enlist to the IDF.And she argued that failing to provide the requisite information to those interested was itself harmful.“Hiding information is what the Soviet Union did,” she told The Jerusalem Post. “Hiding information harms the girls, because when they go to the army without it then they make mistakes.“The National-religious community has different shades and colors. I respect and understand those who want to go to national service, but I want them to respect those girls and their parents, who want [army service].”Shmuel Shetah of the liberally-inclined national-religious organization Ne’emanei Torah Va’Avodah said that the idea of ignoring the phenomenon in which large numbers of religious girls go to the army every year was an attempt by the conservative leadership to stick their heads in the sand.“You can’t ignore it and hope it goes away – it won’t go away. Will they not enlist if they don’t get guidance?” he asked. “They’re enlisting now without guidance, so we need to help and prepare them.”Shetah also rejected the notion that IDF service is any more challenging religiously and socially to young religious women than national-service programs.“There are always challenges, and the education system needs to help and prepare the girls. Hotam thinks there are problems in the IDF and nowhere else, but this is not the case.”