Israel by the campfire: Hundreds of thousands participate in Lag Ba'Omer festivities 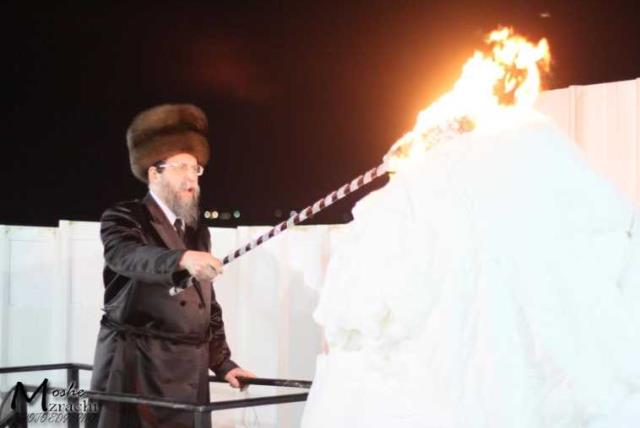 Bonfires were lit throughout the country Wednesday night in accordance to with the custom conducted in memory of Bar Yohai.

Israelis across the country celebrated Lag Ba'omer on Wednesday night, the day in which the Jewish people commemorate the death of Rabbi Shimon Bar Yohai, one of the most important Jewish sages. Half a million revelers observed the tradition of traveling to Mount Meron this year to honor Rabbi Yohai, as beefed up security and rescue teams stood by. On Lag Ba’omer, it is tradition to visit the Mount Meron grave of the Torah sage.
Advertisement
In another part of the country, Prime Minister Benjamin Netanyahu took pause from the roiling political storm that struck the nation in the past two weeks to take part in a Lag Ba'Omer bonfire in the Jerusalem neighborhood of Kiryat Yuval.Bonfires were lit throughout the country Wednesday night in accordance to with the custom conducted in memory of Bar Yohai, who, according to the Zohar, was bathed in intense light the day he died.Among the events said to have taken place on Lag Ba’omer, a break during the 49 days between Passover and Shavuot, is the revelation of the Zohar, a book revealing the secrets of Kabbalah.Other traditions include lighting bonfires — in part to signify the light of the spiritual teachings and remember the Bar Kochba revolt that overthrew Roman rule around 132 C.E. — and giving three-year-old boys their first haircuts.
Advertisement
The day also marks the halting of a plague that raged among the disciples of another Torah sage, Rabbi Akiva, who were said to have acted disrespectfully toward one anotherArik Bender contributed to this report.