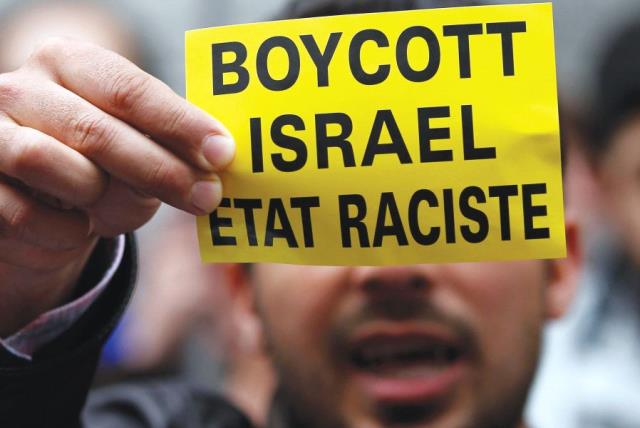 ‘INSTEAD OF fighting the Israeli army on the battlefield or killing civilians through acts of terrorism, the BDS movement seeks to destroy Israel’s image in the eyes of the world.’
(photo credit: REUTERS)

The ministry has in the last three years devoted itself to tackling the Boycott Divestment Sanctions campaign against Israel, and has been given significant sums to address the issue.

Advertisement
Dozens of representatives of organizations combating the boycott movement against Israel and resurgent antisemitism gathered today in Jerusalem for a convention held by the Ministry of Strategic Affairs. The ministry has in the last three years devoted itself to tackling the Boycott Divestment Sanctions campaign against Israel, and has been given significant sums to address the issue. It has so far spent NIS 52 million on its various campaigns, and has another NIS 207 million earmarked for the next two years. Organizations from across the Jewish world participated in the conference, called the Global Coalition 4 Israel Forum, which is designed to foster cooperation among groups involved in the fight against BDS,
Advertisement
Among the groups present was ACOM from Spain, which has been very active in combating the growing BDS movement in that country. BDS has been strongly advocated by the left-wing populist Podemos party after becoming the third largest faction in the national parliament in 2015. Due to Podemos’ efforts, some 100 municipal councils and local government authorities in Spain have adopted BDS motions, some of which include provisions banning the entering into contracts and agreements with Israeli companies and entities, and even Spanish citizens who are associated with Israel or Israeli bodies and companies. ACOM has successfully sued 33 of these municipalities and had the motions repealed on the grounds that BDS discriminates against Spanish citizens on the basis of affiliation or association with a national group, which is illegal under Spanish law. It has another 15 cases currently pending. Most recently, the provincial government of Navarra actually rejected a BDS motion following work by ACOM emphasizing to the local parliament members and the parliament’s legal department that they could be sued for promoting hatred and discrimination. It is also suing nine BDS leaders in Valencia, Spain’s third largest city, for promoting a BDS motion there that was adopted earlier this month. “ACOM is saying that if you promote discrimination and antisemitism, and you are a public official, there are responsibilities, and this is a criminal offense, which can get you banned from public office for,” said ACOM president Angel Mas. He said that the organization is also targeting the funding sources of NGOs promoting BDS. Public funds are frequently obtained by such groups on the basis that they provide humanitarian assistance, but instead use the money for the political BDS campaign. “They glorify terrorism, support ‘resistance and armed struggle,’ and this should disqualify them from public funding and outlaw them,” said Mas. Another organization present at the conference was the Campaign Against Antisemitism in the UK. CAA chairman Gideon Falter describes BDS as an “incubator” for antisemitism, saying that the campaign foments hatred against Jews and is frequently the source of antisemitic incidents. The group is working on several legal angles against antisemitism in the UK, and has successfully sued the Crown Prosecution Service for failing to prosecute blatantly antisemitic comments and speeches “We are trying to get people who are dedicating themselves to incite against Jews, and the authorities have failed in protecting Jews,” said Fakter. “The lack of prosecution for antisemitism is is a betrayal of British Jews for which the CPS is entirely responsible.”CAA has also targeted the British Labour Party owing to the large numbers of its members and officials who have made antisemitic statements in recent yearsThe Solomon Observatory on Discrimination is another organization that is participating in the ministry’s conference. Founded in 2016, the organization has also pursued legal avenues to halt the march of the BDS campaign. It is currently battling with the University of Turin, which is offering academic credits for merely attending three events run by the Progetto Palestina BDS organization. The Observatory will be filing a legal suit in July against this practice. The Observatory also halted a BDS motion in the city of Naples in 2017, and is suing a professor in Genoa University for promoting the ideology of the Ku Klux Klan. A ministry official told The Jerusalem Post that after three years of work, its efforts in combating the BDS movement results were now beginning to be seen. The official said that the ministry has worked through diplomatic channels, particularly in the EU, to stop millions of Euros being transferred to BDS organizations, and has helped grassroots BDS groups like those attending the conference to network, cooperate and learn from each other. The work of the ministry has drawn some negative attention however, since concerns have been voiced that the involvement of a formal state organ in lobbying and legal advocacy in other countries could politicize the anti-BDS campaign, and even compromise it. Other groups are worried that accepting government money could compromise their independence and ability to determine their own agenda and strategies.  Indeed, most of the anti-BDS organizations present at the conference, including those the Post spoke with, have not taken ministry funds for this reason. In May, The Forward reported that the Jewish Federations of North America and the US based Jewish Council for Public Affairs declined to take funds from the ministry because they would have had to register as foreign agents with the Justice Department. The ministry has now entered into a cooperative agreement with a non-profit, public benefit company called Kela Shlomo to enact part of its agenda and strategy, and will provide it with NIS 83 million, on condition that an identical sum be raised in philanthropic donations.  The designated purpose for much of this money is distribution to anti-BDS groups, although the concern here is that such organizations would again be tying themselves to government funds, albeit indirectly, and expose themselves to allegations that they are agents of the Israeli government. The official insisted however that there was nothing secret or untoward about Kela Shlomo, and that the funds directed to the organization were designated for the campaign against the delegitimization of Israel and BDS. Dozens of representatives of organizations combating the boycott movement against Israel and resurgent antisemitism gathered today in Jerusalem for a convention held by the Ministry of Strategic Affairs.