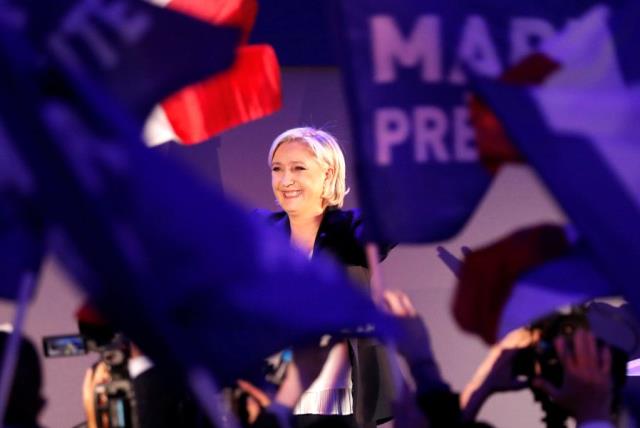 The vice-president of the French National Front will not take over the party leadership due to allegations that he made remarks about Nazi gas chambers.

PARIS - Controversy over her party's record on the fate of Jews in World War Two returned to haunt French National Front presidential candidate Marine Le Pen on Friday as the man due to replace her temporarily as party leader suddenly stood aside.Jean-Francois Jalkh, a vice-president of the party, does not want to take up the post he was earmarked to fill because of allegations - which he firmly denies - that he made questionable remarks about Nazi gas chambers, National Front (FN) member Louis Aliot, who is also Le Pen's partner in private life, said on Friday.
Advertisement
"He (Jalkh) feels that the climate is not conducive for him to carry out this interim role. He wants to defend himself and he will be filing a legal complaint because he feels that his honor has been attacked and I can tell you that he firmly and formally contests what he is accused of," Aliot told BFM TV.Steve Briois, mayor of Le Pen's flagship town Henin-Beaumont and another of the party's four vice presidents, will take his place, Aliot said.Le Pen said earlier this week she would put a temporary party leader in her place while she prepares to face off with centrist favorite Emmanuel Macron in a fiercely contested presidential election second round on May 7.She has worked hard to rid her party of a reputation for antisemitism.
Advertisement
In 2015 she expelled her father, the party's founder Jean-Marie Le Pen, from the FN, disowning his comments that the Nazi gas chambers were a "detail" of history.Late on Thursday, FN officials cried foul after journalists commented on an article in 2005 and quotes from Jalkh that could be construed as endorsing the views of Robert Faurisson, a professor convicted in court for challenging the extent of extermination of Jews in Nazi gas chambers.