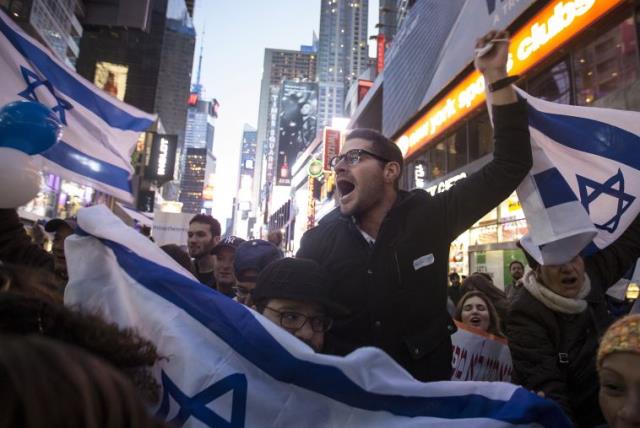 Students reported being attacked by members of the pro-Palestinian group Students for Justice in Palestine at Hunter College, John Jay College, Brooklyn College and the College of Staten Island.

NEW YORK - The Zionist Organization of America has issued a formal letter to Chancellor of the City University of New York James B. Milliken on Wednesday, urging him to act against the harassment of Jewish students at four CUNY colleges over the past months.Students reported being attacked by members of the pro-Palestinian group Students for Justice in Palestine at Hunter College, John Jay College, Brooklyn College and the College of Staten Island.
Advertisement
According to ZOA, several incidents have been recorded on each campus. Among them: a rally for free public college tuition and the cancellation of all student debt organized by SJP at Hunter College this November turned into a demonstration attacking Israel, Zionists and Jews; Just last week, a group of 10 students at Brooklyn College interrupted a meeting of the Faculty Council calling for “Zionists off campus” at the College of Staten Island; Swastikas defaced desks and walls; and at John Jay College, Jewish students have reported being afraid to come to school and some have transferred elsewhere.“SJP has created a hostile campus environment for many Jewish students, causing them to feel harassed, threatened, and even physically unsafe, in violation of the law,” ZOA National President Morton Klein wrote in his letter to the CUNY chancellor.“Such bigotry would never be tolerated by CUNY if it were being directed against another ethnic, racial or other targeted group. CUNY should not be tolerating it when the bigotry is directed against Jews.”In response to the letter and to an article about the letter published on Thursday in The New York Post, the city-wide Students for Justice in Palestine group wrote on its website: “This smear article comes as part of a larger offensive by the Zionist movement, both across campuses and worldwide, in the face of the victories of the Boycott, Divestment, and Sanctions Movement, and the further popularization of the Palestinian cause.”
Advertisement
According to the group, “there is a long history of repression towards SJPs all around CUNY campuses.”“This repression has taken the form of unwanted excessive security at our events, sudden cancellations, and public letters from the CUNY administration denouncing our actions,” the website states. “Students organizing with SJP have received repeated threats and harassment both on and off campus.”