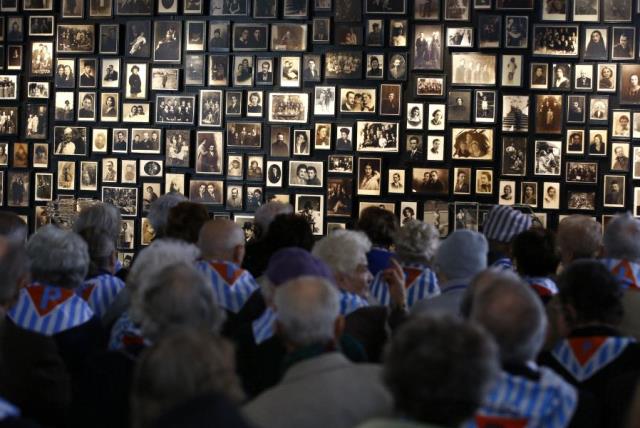 Survivors attend a ceremony in the former Nazi German concentration and extermination camp Auschwitz-Birkenau in Oswiecim, Poland January 27, 2016, to mark the 71st anniversary of the liberation of the camp by Soviet troops and to remember the victims of the Holocaust
(photo credit: REUTERS)

The World Jewish Congress (WJC) announced on Monday that it was launching a global Holocaust Remembrance Day campaign for the second year running.The initiative involved people around the world posting pictures of themselves holding a sign that reads, “We Remember” in their language, on Facebook, Instagram or Twitter, alongside the hashtag #WeRemember.
Advertisement
The campaign seeks to raise awareness of the importance of Holocaust remembrance and engage the young generation.
WJC said that it reached 250 million people with last year’s campaign and hopes to double that number this year.“Around the world today, antisemitism, Holocaust denial and hatred of others continue to rear their ugly heads,” said World Jewish Congress president Ronald Lauder. “We must remember because there are fewer and fewer survivors among us, and within just a few decades, all will have passed. We must remember because ‘never again’ seems to happen again and again.”
Advertisement
“It is now the responsibility of the younger generation to teach their friends about the horrors of hatred, and to spread the message that never again must mean never again,” he added.Lauder noted that last year the organization sought to symbolically reach six million people, but with the power of social media, far exceeded that goal.
“It became a worldwide grassroots movement, of real people and real stories, shared from the heart,” he said.According to WJC, within just a few weeks the #WeRemember became the number one trending topic in Germany and other countries around the world.Participants last year ranged from schoolchildren in a Holocaust history class in Rwanda to Holocaust survivors in Lithuania, French imam Hocine Drouiche and Germany’s Central Council of Muslims head, Aiman Mazyek. People from Ghana, Morocco, Fiji, Uruguay, Chile, Latvia, Germany and Kazakhstan took part.Heads of state, politicians, celebrities and public figures also got on board, including Prime Minister Benjamin Netanyahu and President Reuven Rivlin, Prime Minister of Belgium Charles Michel, German Justice Minister Heiko Maas, US Senator Chuck Schumer, Congressmen Jerrold Nadler and Eliot Engel, and French philosopher Bernard-Henri Levy.