Report: Billionaire Sheldon Adelson to give millions to Trump campaign 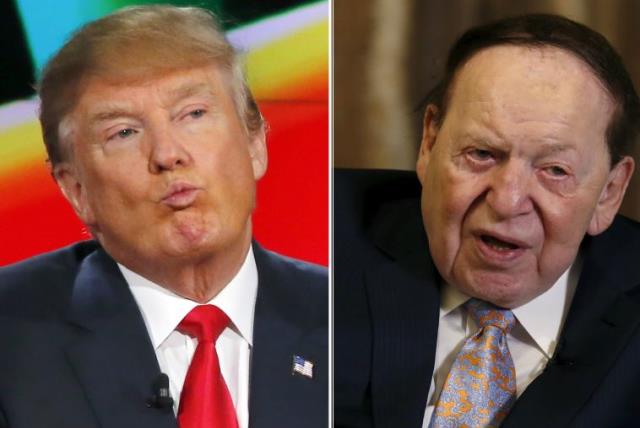 Adelson, a major backer of Prime Minister Benjamin Netanyahu, said his worries about Iran fueled his decision to throw his support behind Trump.

Billionaire casino mogul and ardent Israel supporter Sheldon G. Adelson will reportedly give nearly $100 million dollars to the campaign of presumptive Republican presidential nominee Donald Trump after the two spoke in a private meeting last week, according to The New York Times Friday.Adelson will reportedly scale back the purse strings to other Republican hopefuls looking to fill elected positions in Congress in favor of Trump.
Advertisement
Trump has repeatedly said during the 2016 presidential race that he would not take large donations from outside contributors, preferring to use his own resources and small-dollar donations to fund his campaign. But according to two Republican operatives with intimate knowledge of Adelson's plan, Trump is looking to switch course and is seeking donors with deep pockets that can help fund the final stretch of the presidential race, the Times added.Some projections have put the cost of funding the last six months of the presidential race at a staggering $1 billion.“You may not like Trump’s style or what he says on Twitter, but this country needs strong executive leadership more today than at almost any point in its history,” said Adelson’s op-ed which appeared on The Washington Post’s website early Friday. “The world is less secure than ever, and our allies have lost confidence in our ability to lead.”US campaign finance laws prohibit Adelson from donating more than $2700 to any individual running for president, according to the Federal Election Commission. However, so called "superPacs," established to advocate on behalf of a certain candidate with the caveat that the two are prohibited from coordinating with one another, are able to accept unlimited funds from private donors.
Advertisement
Adelson is among the world's wealthiest individuals, owning casinos from Las Vegas to Macau, and has donated hundreds of millions of dollars to Republican hopefuls over numerous election cycles. Adelson and his wife Miriam spent at least $20 million on political action committees backing former US speaker of the House of Representatives Newt Gingrich just in 2012 alone. Trump has stoked concerns among Republican Jews because of his Israel posture – he made, and then seemed to walk back, a pledge to stay neutral when it came to negotiating Israeli-Palestinian peace, and he has said he would make Israel pay for US defense assistance.But Adelson said his worries about Iran fueled his decision.“For nearly eight years, Republicans have fought tooth and nail against President Obama and his policies,” he said.“We waged battles over debt, government spending, Obamacare and the Iran nuclear deal — an issue of paramount importance to me personally and to many others around the world … If Republicans do not come together in support of Trump, Obama will essentially be granted something the Constitution does not allow — a third term in the name of Hillary Clinton,” Adelson said.