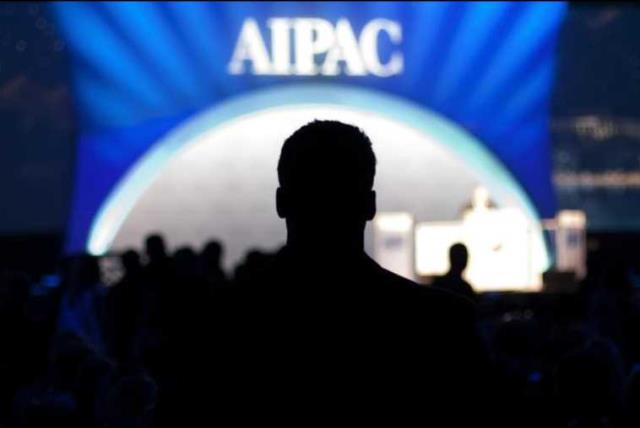 A man waits for the start of the evening's speeches at the American Israel Public Affairs Committee (AIPAC) policy conference in Washington
(photo credit: REUTERS)

WASHINGTON – The powerful American Israel Public Affairs Committee believes its influence in Washington is predicated on maintaining bipartisan support. Every election year, when it holds its massive annual policy conference in the District of Columbia, this requires the pro-Israel lobby to invite candidates from both sides of the aisle – Democrat and Republican, friendly and hostile, quiet and blustering.
Advertisement
This year is no exception.But in the midst of an historically divisive presidential campaign, AIPAC’s decision to invite Donald Trump, real estate tycoon and front-runner for the Republican nomination, has guaranteed a particularly raucous reception outside of the conference’s two large venues in downtown Washington.Tweets from https://twitter.com/Jerusalem_Post/lists/aipac

Protests are planned – beyond the typical gathering of anti-Israel activists – and AIPAC, scheduled to host more than 18,000 people this year, is preparing to take center stage in an ugly American conversation already defined by gutter taunts and identity politics.Trump’s speech scheduled on Monday before a “very important group of people,” as he put it in a television interview last week, will be buffered by speeches from his two trailing GOP rivals – Texas Sen. Ted Cruz, and Ohio Gov. John Kasich. House Speaker Paul Ryan will also address the confab on Monday.
Advertisement
While AIPAC seeks to avoid the politicization of its conference – its basic goal is to create consensus around US support for Israel – its leadership has decided not to allow Vermont Sen. Bernie Sanders, a candidate for the Democratic nomination, to contribute remarks by video. Sanders, who has largely avoided foreign policy addresses throughout his presidential campaign, said he cannot attend in person due to a scheduling conflict.Sanders is also the only candidate in the race to have registered a formal vote against the nuclear deal reached with Iran last summer – the lobby’s greatest policy target in over a decade. AIPAC engaged in a multi-million dollar effort to defeat the deal on Capitol Hill. It lost, in a bruising public fight with the Obama administration.Several Democrats who were torn over whether to support he deal – including some of Congress’s most prominent Jewish members – have lamented that the August fight tore at the American Jewish community itself. Acknowledging the rift, AIPAC’s slogan for this year’s conference is “Come Together.”Without Sanders present, few lifelong progressives – or proponents of the nuclear deal – are represented on the conference schedule. The most prominent Democrats in attendance will be former secretary of state Hillary Clinton and Vice President Joe Biden.Zionist Union chairman Isaac Herzog will also attend in person, while Prime Minister Benjamin Netanyahu will send a message by video. Netanyahu declined to travel to the US in light of the fractious presidential campaign under way, according to senior Israeli officials.
Advertisement
Advertisement
Breaking News World News Iran News Coronavirus U.S. POLITICS Kabbalah
Advertise with us Terms of Service Privacy Policy cancel subscription
Copyright 2021 Jpost Inc.
Designed by DANIEL CHEN