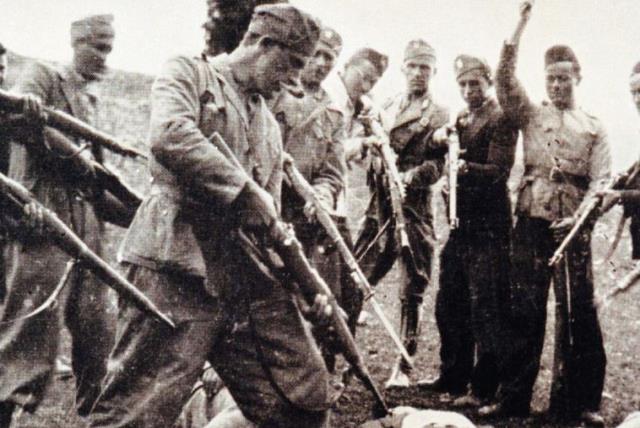 VICTIMS OF the Nazi-backed Ustasha regime killed at the end of the World War Two lay on the ground surrounded by posing Ustasha soldiers near the Sava river in Croatia in 1945.
(photo credit: REUTERS)

"We cannot and will not accept the reluctance of authorities regarding judgement of the Ustasha regime's character and policy of non-reaction to its symbols."

A Croatian ceremony to honor the victims of its most notorious World War II death camp was boycotted by Jews, anti-fascists and ethnic Serbs on Sunday after claiming Croatian authorities tolerate pro-Nazi ideology, according to AFP. The ceremony took place at Jasenovac camp and was attended by the conservative leaning Prime Minister Andrej Plenkovic, ministers in his government and foreign diplomats.
Advertisement
The camp, which lies 100 kilometers southeast of the nations capital, Zagreb, was known as "Croatia's Auschwitz" and was run by the Nazi- affiliated Ustasha regime. The number of killed at the camp is still in dispute, varying between tens of thousands to 700,000.This is the second year that representatives from Croatia's minority communities have decided to snub the official event, opting instead to organize a separate memorial. Franjo Habulin, head of an anti-fascist association, said: "We cannot and will not accept the reluctance of authorities regarding judgement of the Ustasha regime's character and policy of non-reaction to its symbols."A plaque that was unveiled at the camp last November with the Ustasha regime's slogan, "For the Homeland Ready," is a major cause of contention among these groups.
Advertisement
The plaque pays homage to former paramilitary fighters who were killed at the beginning of the War of Independence in Croatia in the 1990's.Plenkovic has been criticized for not doing enough to quell extremism and pro-Nazi expressions, even though he has promised to move away from the intolerance many see as connected to his center-right predecessors.