'Everyone with a kippa' campaign launched to support French Jews 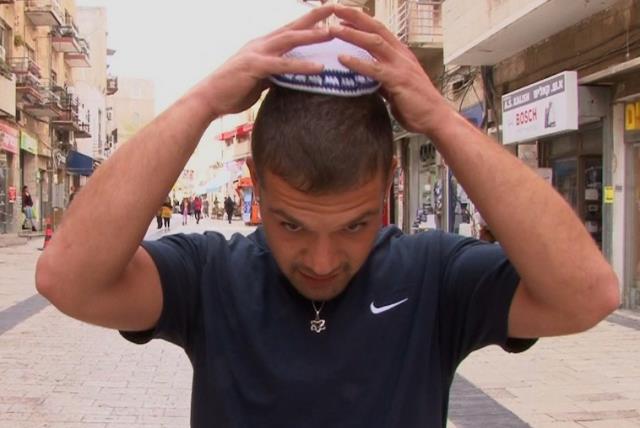 A man putting on a kippa as part of a solidarity campaign with European Jews
(photo credit: screenshot)

The public is called on to show solidarity and wear a kippa on Friday at 10 a.m.

A new campaign calling on the public to wear a kippa in solidarity with French Jews flooded Twitter feeds with Photoshopped images of celebrities wearing kippot on Thursday .The hashtag "#TousAvecUneKippa," French for "everyone with a kippa," gained popularity on Twitter after Zvi Ammar, president of the Consistoire religious association in Marseilles, advised the city’s Jews to temporarily refrain from wearing the Jewish headgear in order to forestall assaults such as Monday morning’s machete attack on a Jewish teacher outside a local synagogue.
Advertisement


These comments sparked condemnations from within the community as well as from leading political figures. Users took to Twitter to call on everyone to wear a kippa as a sign of strength and support, using edited photos of well known figures wearing skullcaps to encourage participation. Brad Pitt, David Beckham, Michael Jackson and Bono ware just some of the doctored celebrity photos used in posts specifying Friday at 10 a.m. as a time of global support against anti-Semitism.
Advertisement


On Wednesday, French President Francois Hollande expressed dismay that French Jews feel the need to “hide.” “It is intolerable that in our country citizens should feel so upset and under assault because of their religious choice that they would conclude that they have to hide,” said Hollande.French Jews often hide their kippot under baseball caps. In a 2013 study by the European Union’s Agency for Fundamental Rights, a third of Jews polled said they refrained from wearing religious garb or Jewish symbols out of fear, and 23 percent avoided attending Jewish events or going to Jewish venues.On Wednesday, French media reported that the assailant in Monday’s attack told investigators that he had been inspired by Islamic State and that he wanted to “die as a martyr,” after posting a photograph of himself holding his victim’s head on social media. The victim was lightly wounded. Rina Bassist and Sam Sokol contributed to this report.
Advertisement
Advertisement
Breaking News World News Iran News Coronavirus U.S. POLITICS Kabbalah
Advertise with us Terms of Service Privacy Policy cancel subscription
Copyright 2021 Jpost Inc.
Designed by DANIEL CHEN