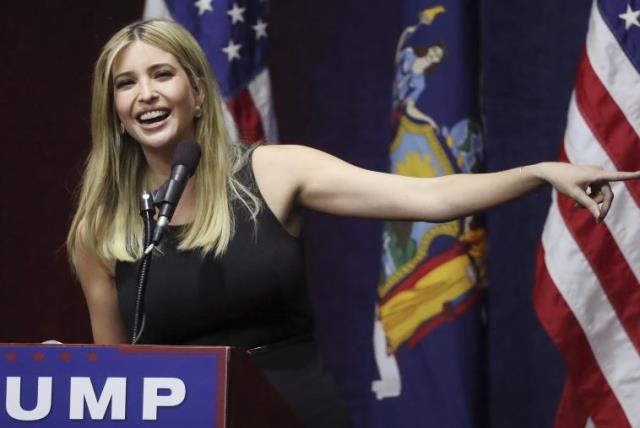 Ivanka Trump, daughter of billionaire casino magnate and Republican presidential nominee Donald Trump, is feeling the repercussions of her father's controversial campaign.Recently, there have been calls to boycott Trump-related products including a clothing line under the heiress' name, internet publication The Wrap reported Tuesday.
Advertisement
The effort, started nearly three weeks ago, has already garnered over 119 million impressions on Twitter, with supporters using the hashtag #GrabYourWallet to convey their disapproval over recently-unearthed audio where the candidate can be heard discussing the sexual assault of women.In an interview with "Access Hollywood" that aired in 2005, Donald Trump was caught making sexually explicit comments relating to his ability as a celebrity to "grab" women by the genitals. The revelation helped spur a social media campaign started by Sue Atencio, a 59-year-old grandmother, and marketing specialist Shannon Coulter, who expressed shock at the then-reality TV host's comments.“Ivanka markets what she wears on the campaign trail,” Coulter told The Wrap. “The stores that we love are directly profiting from a campaign that we consider hateful.”
Advertisement
Activists are demanding that American retailers- including Amazon.com, T.J Maxx and Macy's among others- drop Ivanka Trump-branded merchandise, which earned nearly $100 million in sales, according to The Wrap.Retailers for their part have not acted on the request.In response, Ivanka Trump shrugged off the controversy, telling American broadcaster ABC last week that “the beauty of America is people can do what they like, but I prefer to talk to the millions, tens of millions of American women, who are inspired by the brand and the message that I’ve created.”  Gauging the effects of the Trump campaign on Ivanka's merchandise brand, a recent Morning Consult Survey revealed that 57% of women said they will refrain from purchasing her products, The Wrap reported. Ivanka, who works for her real estate magnate father’s corporation, had an Orthodox conversion before marrying Jared Kushner earlier in the year. “My father was very supportive,” she told CNN in an April interview. “He knows me. He knows and he trusts my judgment. When I make decisions, I make them in a well-reasoned way. I don’t rush into things."Kushner has been the Trump campaign’s main point man to the Jewish community, and he helped shape the candidate’s well-received speech last month to the American Israel Public Affairs Committee.JTA contributed to this report.