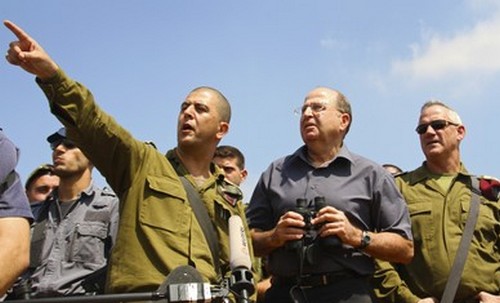 Defense Minister Moshe Ya’alon said on Wednesday that Israel’s military campaign against Hamas in the Gaza Strip will expand in the next few days while vowing that “it will exact a huge price.”
Advertisement
“We are continuing to carry out attacks that are exacting a heavy price from Hamas,” Ya’alon said as Operation Protective Edge entered its second day. “We are destroying [Hamas’] arms, terrorist infrastructure, command and control systems, institutions, government buildings, terrorists’ homes, and we are killing terrorists in the organizational high command.”The IDF confirmed on Wednesday that an IAF airstrike targeted Hamas terror operative Abdullah Difallah while he was riding on a motorcycle in the northern Gaza Strip.Palestinian sources had earlier reported that Israeli aircraft struck a motorcycle killing one person and seriously injuring another.The IDF stated that Difallah had been responsible for firing rockets into Israel.
Advertisement
According to Palestinian media, three other people were killed in IAF strikes on Wednesday, bringing the death toll since the beginning of Operation Protective Edge to 27, with more than a hundred injured.“This activity will continue and escalate,” the defense minister said. “From our standpoint, this is a campaign that will not end anytime soon, and we must continue to maintain stamina and patience. We will continue to hit Hamas and other terrorist organizations hard from the air, at sea, and on the ground in order to ensure the security of the citizens of Israel.”“The campaign against Hamas will expand further in the next few days, and the organization will pay a very steep price,” Ya’alon said. “I would like to once again praise the manner in which the citizens have conducted themselves and I call on them to continue to be attentive to instructions. I would like to once again offer my hearty best wishes to the commanders, soldiers, and support staff on land, at sea, and in the air who continue to act with determination and professionalism in order to protect the citizens of Israel.” The IDF struck 160 terror targets across Gaza overnight between Tuesday and Wednesday, and 440 targets since the beginning of the operation this week against Hamas in Gaza to stop rocket fire on
Israel.Targets hit by the air force include 10 tunnels and five Hamas government buildings, including the ministry of interior, the national security ministry, and a naval police position.The air force also hit 118 underground rocket launchers, including infrastructure designed for mid-range and long-range rocket fire against Israel. The attacks caused significant damage to the rocket firing capabilities of terrorist organizations, the IDF said.Israel Navy ships attacked targets belonging to Hamas's naval force.The rocket fire from Gaza continued on Wednesday with some 40 rockets launched at Israel by midday, eight of which were intercepted by the Iron Dome.
Advertisement
Advertisement
Breaking News World News Iran News Coronavirus U.S. POLITICS Kabbalah
Advertise with us Terms of Service Privacy Policy cancel subscription
Copyright 2020 Jpost Inc.
Designed by DANIEL CHEN