Stepping up campaign against Airbnb, Palestinians urge: 'We can't live there, so don't go there' 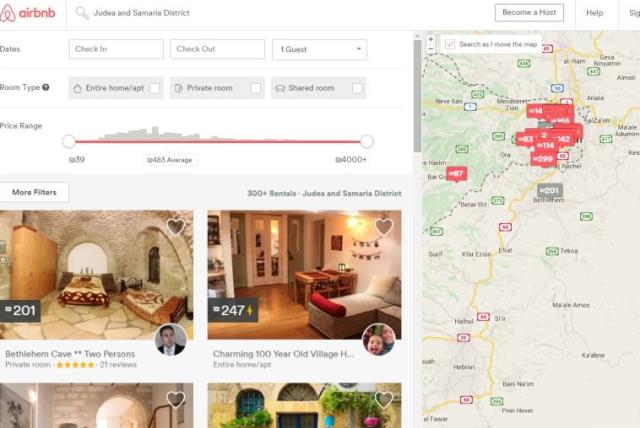 Left-wing organization Jewish Voice for Peace released a YouTube video Saturday to up a joint-campaign against Airbnb's listing of West Bank settlement homes on its vacation home rental platform. Urging travelers to steer clear of West Bank rentals, the video featured unnamed activists and Palestinians speaking out against Airbnb's failure to "follow international law," which, by United Nations standards, deems "Israeli settlements in the West Bank illegal."
Advertisement
"If you go there, you're basically collaborating with settlers who steal Palestinian land," said one activist. "I implore you not to go to Airbnb in the settlements," he said. The video was released as promotion for the organization's joint campaign with several pro-Palestinian groups, titled "Stolen Homes," which has garnered 146,104 signatories to date in an online petition. The coalition of organizations, which includes the US Campaign to End the Israeli Occupation, claims that Airbnb, by enabling the listing of West Bank homes, promotes "structural discrimination, theft of Palestinians' land, and direct violations of international law," and profits off of Israel's "continuing occupation and dispossession of Palestinians," through its fee-based revenue model."That's our land," said one Palestinian, pointing at an Israeli settlement in the video. "It was stolen by the Israeli settlers since 1976." He is pictured with his wife and son, holding up a poster reading, "We can't live there, so don't go there," with the hashtag #stolnhomes (sic). The poster is featured repeatedly in the video.
Advertisement
Another Palestinian is recorded saying, "We ask everyone in the world who believes in human rights and human value not to come and not to...make tourism inside settlement."Airbnb has not issued a response to the petition, which has been live since March. Approximately 300 settlement properties are listed on Airbnb, many of them labeled as being in Israel rather than specifying they are located over the Green Line.In February, Jewish Voice for Peace,  a proponent of the BDS movement, took responsibility for distributing thousands of fake and anti-Israel versions of The New York Times in Manhattan and on social media.It also launched a mock Airbnb website for its Stolen Homes campaign, featuring a listing of a "stolen home by illegal settlers," up for rent for "$100 per night, on top of subsidies from the Israeli government."