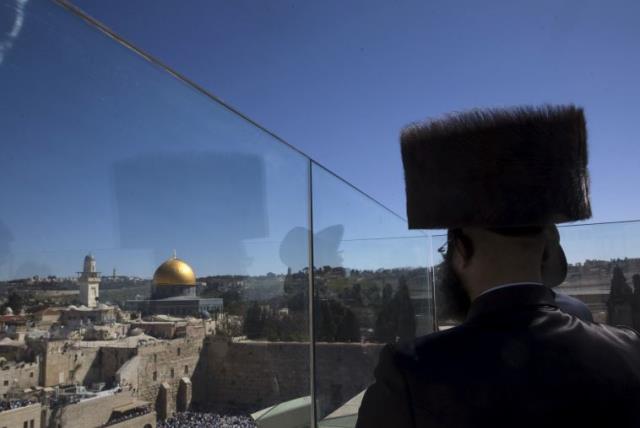 An ultra-Orthodox Jewish man stands on the rooftop during a special priestly blessing for Passover at the Western Wall
(photo credit: REUTERS)

The campaign, which is being run by the Natruna - True Torah Jews organization, was launched last week in a number of cities with large Hassidic Jewish populations.

Last month, a Hebrew-language ultra-Orthodox newspaper caused a stir when its deputy editor published an opinion piece in Arabic urging would-be Palestinian terrorists to spare haredim since they have no intention of visiting the Islamic and Jewish holy sites on Temple Mount.Now, an austere, anti-Zionist sect of Hassidic Judaism is taking the notion a number of steps further by reportedly planning a massive public relations campaign in the West Bank, east Jerusalem, and Arab municipalities in Israel proper.
Advertisement
According to the Kikar Hashabat news site, the organized Satmar community is raising funds from followers in both Israel and abroad for an extensive blitz on Israeli Arab and Palestinian media, the aim of which is to make clear its opposition to Zionism as well as to highlight the halachic edict banning Jews from visiting the Temple Mount.The campaign, which is being run by the Natruna - True Torah Jews organization, was launched last week in a number of cities with large Hassidic Jewish populations. Streets were adorned with large banners and notices in Yiddish urging the haredi public to back the campaign, which is aimed at disassociating Hassidic Jews from religious Zionist settlers in the West Bank.The banners also urge Hassidim to donate money to the effort. "There is a very important need to explain to the Arabs that haredi Jews do not ascend the Temple Mount under any circumstances," one of the ultra-Orthodox businessmen involved in the fundraising effort told Kikar Hashabat.
Advertisement
A century ago, Rabbi Yosef Chaim Sonnenfeld, the co-founder of the anti-Zionist Edah Hachareidis community in Jerusalem, also signed banners and notices reminding the public of a religious ban on entering Temple Mount.Now the Hassidic sect wishes to "revitalize" the effort.Badatz, the religious courts that rule on issues of halacha, endorsed the campaign, calling on followers to contribute money.Hassidic leaders hope that the message will get through to its intended audience and "the Arabs will be convinced that haredi Jews adamantly oppose going up to Temple Mount."Palestinians have accused Israel of seeking to change the status quo at the holy sites, with a number of religious Zionists agitating for increased rights of worship for Jews.Israel has sought to ensure the international community that it wishes to preserve the status quo in which "Muslims worship and Jews visit."