Haniyeh: Hamas not ramping up for war, ready for one if provoked 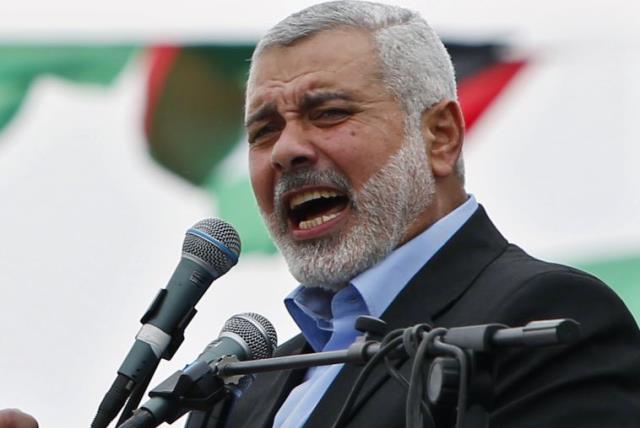 Ismail Haniyeh talks to his supporters during a Hamas rally in Gaza City
(photo credit: REUTERS)

Haniyeh’s announcement came in response to reports in the Israeli media to the effect that Hamas is preparing for another war with Israel.

Hamas is not preparing for a new war with Israel, but is prepared for one if it is imposed on it, Hamas leader Ismail Haniyeh said on Saturday.Haniyeh’s announcement came in response to reports in the Israeli media to the effect that Hamas is preparing for another war with Israel.
Advertisement
“We are not preparing for a new war,” Haniyeh said during a ceremony to honor award-winning Palestinian journalists in Gaza City.Haniyeh said more attention should be focused on the “reality of the Al-Aqsa Mosque, Jerusalem and the West Bank.” He also warned against any attempt to abort the current wave of attacks against Israelis, which began last October.The Hamas leader called on the journalists to join the effort to “protect the intifada and its culture and grievances.”Haniyeh condemned the continued incarceration of Hamas-affiliated journalist Mohamed Al-Qeeq, who has been on hunger strike in Israeli detention for the past two months.
‭‮
Advertisement
Tags Ismail Haniyeh
Advertisement
Advertisement
Breaking News World News Iran News Coronavirus U.S. POLITICS Kabbalah
Advertise with us Terms of Service Privacy Policy cancel subscription
Copyright 2021 Jpost Inc.
Designed by DANIEL CHEN